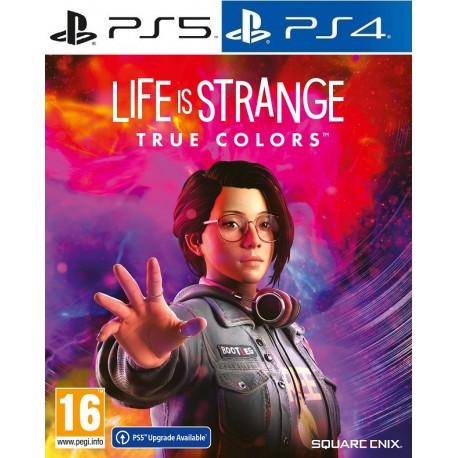 Embrace your unpredictable supernatural abilities and reveal the truth about the dark secrets that are hidden in a small town.
Life Is Strange: True Colors is a passionate plot-led adventure game where an emotional psychic power is the vital key to unlocking the truth and solving a compelling mystery.

Our protagonist Alex Chen never came to terms with her Power of Empathy, whereby she can sense and manipulate the strong emotions of people near to her. When her brother is found dead, it is only these powers that will enable her to discover the truth about what happened. But the truth can sometimes be painful. True Colors is the latest outing by the people who brought you the award-winning, Life Is Strange series, Deck Nine, They have once again developed a wonderfully emotional story that is set in the idyllic and sedate small town of Haven, There you will be introduced to an eclectic mix of local characters that have been beautifully written and genuinely enthrall you in the latest addition to the Life Is Strange franchise.

Great Improvements Visually
When you compare True Colors to the previous editions in the Life is Strange series of games you immediately notice the great improvements visually that have been made, the game has always been renowned for its dramatic plots and believable characters, but these major changes to the aesthetics that have been made, and the full performance capture adds visual beauty to the moving storyline that has never been experienced before in the franchise.

Reunited With Her Brother
After the death of her parents, Alex Chen played by the talented voice actress Erika Mori, is placed into the care system and separated from her brother Gabe, she is put into foster care and is not reunited with her brother again until she reaches adulthood, and they finally meet up in the charming and picturesque town of Haven, Colorado, with hopes of finally reuniting her fractured family, but before she can fulfill her dream her brother is killed in a terrible accident leaving both her and the townsfolk in shock.

It Might Not Be an Accident
Alex has always suppressed her psychic ability to sense and manipulate people's emotions, especially powerful emotions like fear, hostility, and sadness. As she starts to find out more about Gabe's death, she becomes suspicious that it might not be an accident after all. Her attention is turned to an unscrupulous mining operation that seems to have a big influence in the town of Haven. Finally excepting her powers in full, she sets out to discover the truth.

With Various Choices of Dialogue
With a wonderful cast of townspeople like the barman Jud Lucan or music-loving Steph Gingrich, each with their backstory and are brought to life realistically by some great vocal talent, and as the gameplay is mainly spent interacting with the locals, believable characters are so important to the game experience. You can also interact with different objects which you can either do a quick look at or you can interact with them directly. With various choices of dialogue, you always feel that the conversations can go in any direction

Best Ever Offering in the Series
Life Is Strange: True colors can hold its head up high as the best offering in the series. Visually it is stunning and on the next-gen PS5 it is even better, the delightful characters that inhabit the sedate town combine to create a thrilling mystery that will keep you gripped as you explore the town's hidden spots and use your Power of Empathy to investigate and deduce who is responsible for your brother's death. Powerful and emotional, True Colors is a game out on its own.