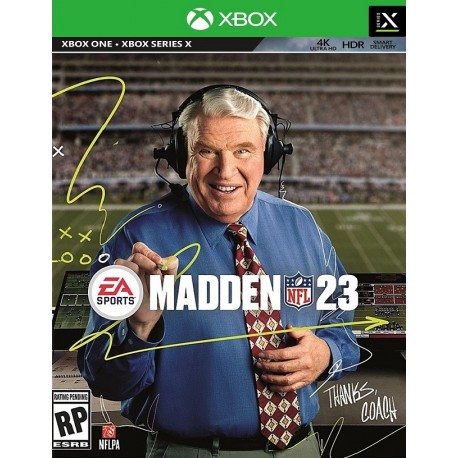 It's the Xbox One Version but works on Series X/S with Xbox One Graphics!

Well, that came around quickly, it seems like only last week that I was reviewing Madden NFL 22 in all of its glory, and it is already time for the new and improved Madden NFL 23 to be released, so let us take a closer look at the ins and outs of the latest incarnation of the iconic football franchise. So, what is new and what features have been added? Well, according to those clever people at Xbox the new major feature to be introduced for Madden NFL 23 is the use of the FieldSENSE Gameplay System, an intuitive and consistent Gameplay Engine that produces ultra-realistic action that allows players more control throughout the complete range of modes. FieldSENSE apparently “leverages animation branching technology”, whatever that means, but this and a plethora of improved new user control mechanics make it a smooth, realistic gameplay flow that gives the game a seriously more authenticity to every play.

Player Ratings for the Running Backs
As with every season of Madden NFL, every player waits with bated breath to see his player rating and this year is no exception, here are examples of player ratings for the running backs to give you an idea about them, these greats made our top 10 list. The top two Derrick Henry and Christian McCaffrey both had their season curtailed due to injury but are still topping the lists because of their amazing skills.

They Drop You Straight into Your Fifth Season
Always a favorite for Madden NFL fans is the Face of the Franchise mode which has been revamped for Madden NFL 23 with The League this year they drop you straight into your fifth season with any of the 32 NFL teams, you can choose your favorite position to become a Quarter Back, Wide Receiver, Running Back or Corner Back as you search for the chance of to become a success with a fresh team, you will have to earn yourself a new one-year contract by showing everybody that has got what it takes to be the best, knowing that you will get certain rewards depending on how you play and performance boosts from weekly activities, you will have to give 100% in every game. As you receive player rating updates from Chad Johnson, you will be pushed to reach the magical 99 and take a step up from also running to all-time great