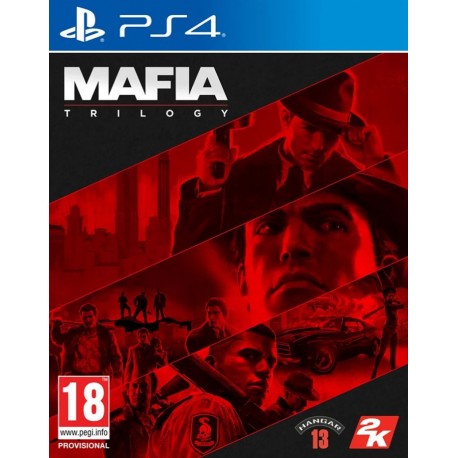 Mafia: Trilogy PS4 & PS5 brings together three Mafia games and their DLCs into a single package. Mafia is a series of action-adventure video games set in an open-world environment, portraying each one of them a distinct period and the organized crime of that era. The First Mafia game was developed by Illusion Softworks (who later become 2K) and published by Gathering of Developers in 2002. Mafia II was created by 2K and released by 2K Games in 2010. The last game of the series, Mafia III, comes out in 2016 and was developed by Hangar 13 and published by 2K Games. For Mafia: Trilogy, 2K Games assigned to Hangar 13 the task to remake the first game, remaster the second and extend the third.
The most awaited game of the trilogy must be the original Mafia game, the highly acclaimed game of 2002, and the video game that put the franchise on the map. Players find themselves in the prohibition era (the 1930s), in the fictional American city of Lost Heaven, a city that takes its design by the architecture and atmosphere of New York, Los Angles, and Chicago. The narrative is realistic, inspired by the mobster Thomas “Tommy” Angelo, and the gangster war between the Salieri and Morello families. The gameplay is mostly on-foot navigation from a third-person perspective, shooting, driving, and even racing. Cutscenes make the transitions and connections between the missions. A day/night cycle, the car damage physics system and detailed graphics of the various edifices of the fictitious city - church, restaurants, airport, museum, an abandoned prison,…etc., complete the game’s atmosphere and bring players the most recognizable gangster video game yet.
Mafia II takes the players to the 1940s - 1950s era, in the fictional American city of Empire Bay, based in Boston, New York, Chicago, Detroit, and San Francisco. The narrative is inspired by the story of Vito Scaletta, a Sicilian immigrant that enrolled in the U.S. Army to avoid jail time, and who returns home after the serving during the Second World War. One of the things that contribute to the atmosphere of that time is the licensed music. You can listen to it, including the news and commercials of that era, to the in-game radio stations. There are notable additions to the gameplay, the handling of vehicles will take care of the seasons and weather, the interaction with objects got a second action button reserved for the “violent” action, in addition to the standard action button, as well as a new cover and shooting controls. The content was brought to date (the 40s-50s): cars, weapons, and overall atmosphere.
Mafia III brings the atmosphere of the 1960s, in the fictitious American city of New Bordeaux, inspired by New Orleans. The game put players in the shoe of Lincoln Gray, a Vietnam War veteran, who is looking for revenge against the local mobsters who killed its adopted family. The game got bigger in content and brought some improvements to the gameplay. The open-world of this action-adventure video game is now bigger than the worlds of the first games combined. Players may complete the missions by killing enemies using various arms as in the previous games, but they may also ask for help that arrive in form of a van of allies that help them. Besides the violent actions, players may complete missions by employing stealth tactics.
Mafia: Trilogy is your chance to have all these games, including DLCs, with all improvements and additions.