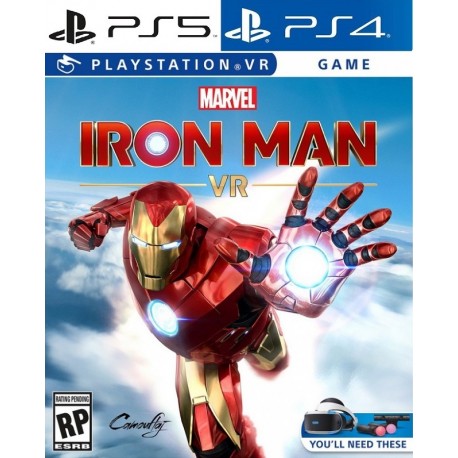 Put on your PlayStation VR headset and suit up as the Armoured Avenger in this original Iron Man adventure! Tony Stark has exited the weapons industry and has instead concentrated his talents on creating new technology to use to battle evil as Iron Man. It has been several years since Tony Stark took on the mantel of the world-famous superhero Iron Man, when he is attacked by a mysterious character called the Ghost, who is a hacker and anti-corporation activist who has a habit of repurposing old weapons from Stark Industries. As she attempts to bring down Tony's empire, a ghost starts to attack his Stark Corporate buildings that are situated all around the world, as the stakes get higher and higher it seems to be leading to an inevitable showdown.

You are Immersed in the Marvel Universe
Marvel fanatics old and young, this game has been designed just for you, It is the nearest that you are going to get to donning the legendary Iron Man armour and taking to the skies. From the second you put on your VR headset you are immersed into the Marvel Universe, and interact with some of the most famous characters, the charismatic voice talent brings their own twist to legendary characters like his genius AI Friday, Nick Fury and Maria Hill. It is that realistic that you and Tony Stark essentially become one as you grow into his enigmatic personality. The script has some of the best writing I have ever seen or had anything come close to, it is so rare that you get this amount of pleasure from any other game that I have ever played, you can feel the Marvel influence all over it, the humour, tension and dramatic moments that Marvel has become synonymous with, it is all there for your enjoyment.