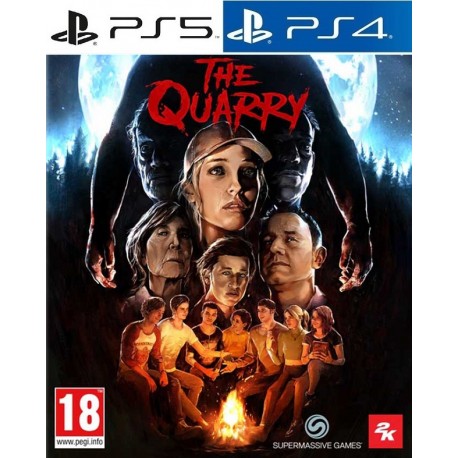 This is the PS4 version of the game, but it runs on PS5 due to backward compatibility.

Supermassive Games, the developers of Until Dawn and The Dark Pictures Anthology: House of Ashes, brings you their latest offering in the narrative-focused horror genre, which has become their staple production, The Quarry is an exciting, hair-raising, youthful tale of horror. Set in the ideal spot for any horror story, a summer camp, as the season comes to a close, and it is time to return home to their families, a group of camp counselors decide to throw a goodbye party to celebrate, but as is always the case in any horror story worth its salt, things quickly start to go array. Like with Until Dawn, the game is all about the choices that you make and the consequences of those choices. Can you survive the night in a hostile forest pursued by strange hunters and sinister creatures, well, you decide.

The Quarry Relies Heavily on its Voice Talent to Set the Tone
As with any story-based game The Quarry, relies heavily on its voice talent to set the tone and bring tension and drama, to ensure these Supermassive games have compiled a star-studded cast including some of the greatest actors in the horror genre, David Arquette stalwart of the scream franchise does a wonderful job of portraying Chris, Ted Rami who starred in the Evil Dead and Miles Robbins from Halloween, working along some of the most popular film and TV voice actors, Ariel Winter plays Abigail, Ryan is portrayed by the talented Justice Smith, an actor that has been around for many years and has starred in loads of the top action films including both Alien and Terminator Lance Henriksen has the role of Jedediah, Grace Zabriskie is particularly convincing as the matriarch Eliza and straight from Star Trek Picard is Evan Evagora who plays the Romulan, Elnor in the series and Nick in this game. Quite the Hollywood A-list celebrities have been roped in to ensure that this is a convincing and enthralling drama. In total, there are 15 fantastic voice actors to make this a believable tale and keep you gripped by the storyline.

It All Depends on Your Judgement
During the game, you will take the role of all nine of the camp counselors at various times and each one can live or die because of the options that you pick, they all can survive the night or all of them could die horribly, it all depends on your judgment. Dark and atmospheric The Quarry provides a beautiful backdrop and a detailed environment that slowly turns into a sinister and ominous nightmare as the story unfolds, there are a few great modes to point out, the first being Movie Mode, which alters certain variables, decides how many live or die, then change some of the character-specific behaviors before sitting back, getting the popcorn out and snuggle up on the sofa as the story plays out in all of its cinematic glory while you watch and the co-op mode where you can invite up to seven friends to watch as you play, and the twist is they get to vote on which actions you should take, with the majority deciding the outcome. As a lover of this style of game, The Quarry is a first-class torch-bearer for the Supermassive stable.