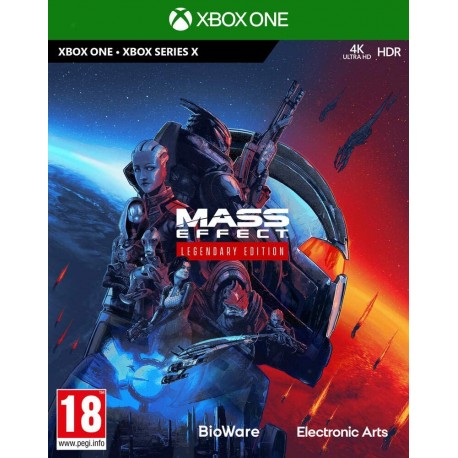 There is only one man that can stand in the way of humanities greatest, ever threat. Mass Effect™ Legendary Edition will let you relive the life of the legend that is Commander Shepard, in this award-winning edition of the game that includes the single-player base game and also 40 DLC from Mass Effect, Mass Effect 2, and Mass effect 3 and includes promo weapons. Armour and special packs, all of which have been lovingly remastered and optimized for Ultra HD 4K. For the very first time, you can relive the legendary saga with all of its most exciting and enthralling action and the amazing interactive story with the freedom for you to choose how your personalized story will venture forward by creating and customizing your unique character, you can personalize how your character will look the type of skills that they have control of and of course their selection of weapons. When you are ready, take command of your special elite recon squad and join the fight that spans the galaxy that is in turmoil. These choices will then seamlessly follow you from one game to the next one. Every decision you make will decide the outcome of all your missions as well as every relationship, every battle, and even the future of the galaxy itself.

The Perfect Equilibrium
Believe it or not, Mass Effect 1 was originally released by BioWare way back in 2007, known as the forerunner of all modern RPG games, even with its clunky and awkward gameplay and those unreliable weapons that are used to make gamers throw their controller across the room in frustration. So how do BioWare solve the conundrum of how far they could upgrade and optimize the gameplay and visuals without taking away the charm of the now 15-year-old game. The answer was to make subtle changes to the annoying things, like the previously impossible to drive Mako, or the ability to find and use cover, but best of all is that you are given free rein over all the weapons at your disposal. The game was released for the PS3, so there was a certain clumsiness and unreliability that users now look back on with fondness, but new players would find it dated and archaic, so it is a relief that the publishers have seemed to find the perfect equilibrium, bringing the game into the modern era while still maintaining all the character and charm of the original game. Hundreds of Hours of Unforgettable Gameplay

Mass Effect™ Legendary Edition is thankfully a return to greatness, you would be hard pushed to compete with the rose-colored memories that the game evoked in you, but gratefully Bioware have paid homage to the original and has added their little bit of modern technological magic that makes returning to this iconic universe is enhanced with the new features that they have created. This game is amazing value for money, with literally hundreds of hours of fantastic unforgettable gameplay to excite, tease and if you play on a higher difficulty level, frustrate. Whether you play it on the Xbox Series X|S or the Xbox One, you will not be disappointed with the stunning remastering of this iconic universe. I envy people who are going to play these games for the first time with Mass Effect™ Legendary Edition, as you will have the opportunity to finally discover how brilliant the Mass Effect Trilogy was without pulling their hair out as we did.