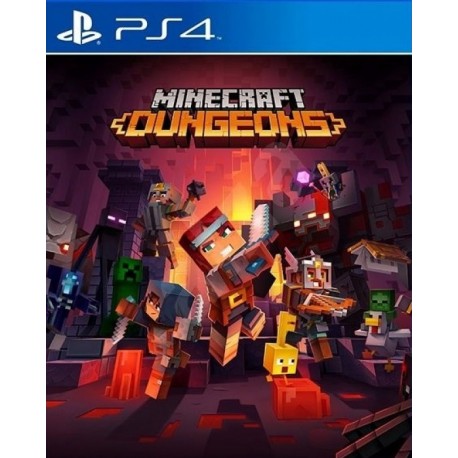 Minecraft Dungeons is an action-RPG dungeon crawler developed by Mojang Studios and Double Eleven and published by Xbox Game Studios for Microsoft Windows, Xbox One, PlayStation 4, and Nintendo Switch. The game was released on 26 May 2020, and it is a spin-off of the hugely successful - 200 million copies sold – Minecraft.
The world of Minecraft Dungeons is populated by the recognizable “blocks”, the 3D objects of Minecraft. Many of the situations, locations, and mobs from Dungeons appear in the original game as well. There are monsters, traps, weapons, puzzles, treasures, various villages, villagers, evokers, creepers, as well as bosses, levels, and more. It is a rich and familiar world – the blocky world of Minecraft, inhabited by peaceful villagers and angry mobs.
Dungeons are based on the world of Minecraft, but it is a different kind of game. Where Minecraft is a 3D sandbox game offering unlimited open-map exploration, and where players can build anything they imagine, Minecraft Dungeons is a dungeon crawler, closer to action role-playing games like Diablo or Torchlight, a hack and slash offering a linear story-driven campaign. This game is about killing and looting, as much as it is about exploring.
Minecraft Dungeons must be understood as a family game, and indeed it is a fun game for all families. The decision was taken to make the game attractive to players of all ages and skills. As a result, some things were streamlined or eliminated. For example, there are no classes, and players may take a character and customize it as they wish. Any weapons or armors may be used, as there are no classes, so it is somewhat chaotic but also simpler and easier to manage. It is very easy to recognize which characters are friends, and which ones are foes. This simplifies things a lot, leaving players with fun for all abilities and ages.
It can be played single-mode, but also up to 4 players online or local, multiplayer cooperatively. A basic playthrough is rather quick, but despite the simple gameplay and lack of depths, Minecraft Dungeons will keep players hooked for long. Players will move their characters through various dungeons, swamps, mines, canyons, collect treasures, gear up, find monsters and bosses until they manage to save the villagers, and eliminate the Arch-Illager power.
Teaming up will make things easier. When players are online, they may separate from the main group and explore the world on their own, but when they play locally, they will have to be on the same screen. If one of them falls behind, it will pop back on the screen with the others. Younger and inexperienced players will have a lot of fun, and more experienced players will still find plenty of things to do to enjoy this game title.
If you are looking for family-friendly video games than Minecraft Dungeons is one of the most accessible and engaging titles you will find. The depth of the game moved now on the character management. Maybe it is a lite-ARPG when compared with others, but the simplicity and agility of the game, its capacity to be challenging to a vast range of players of any ability, is what makes this game title one of the strongest proposals now.