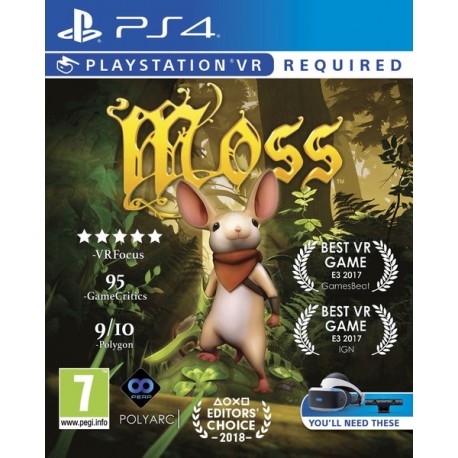 Discover the action-adventure puzzle game with so many amazing VR features that will blow your mind. The most interesting combination between the classical features of a cartoon adventure game and the futuristic approach of VR platform is now available featuring a super ambitious mouse named Quill. With other interesting characters, exciting fights and the pure amazement of discovering new landscapes and new worlds, Moss comes along to bring joy smiles and the adventurous spirit in your gaming world.

Like many of us, Quill dreams big and sometimes people tend to tell her that her dreams are too far from reach and cannot be achieved, at least not as fast as she desires. Well, she comes to prove everyone wrong, while exploring the woods she finds a Glass Relic that makes ancient magic fill the universe but also put her uncle in great danger. This is the breaking point where the ambitious little mouse starts her journey and also the adventure of her lifetime.

You will be the one that stands by her side and with whom she will conquer and solve the most difficult quests while defeating dangerous enemies and solving unimaginable puzzles. While you stand by her side, no battle is too cruel and no obstacle is too massive to overcome. Nothing can and nothing will stop the two of you in the adventurous journey you embark.

However, you have to have the right person beside you. Even though you can achieve anything you want on your own, things are much easier when you have someone that matters by your side. Any villain becomes easy to defeat, every puzzle so simple to solve, just if you have someone along with that just by their presence, they manage to give you so much self-confidence that you can do anything you want.