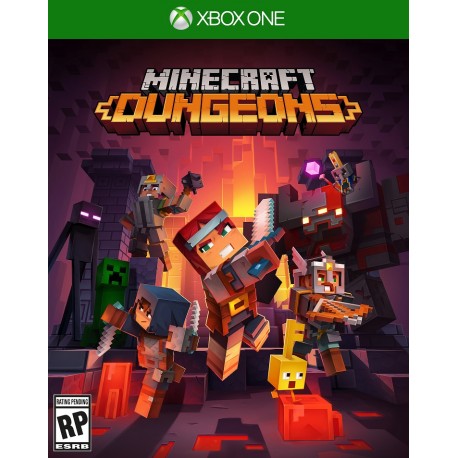 Minecraft Dungeons is an action role-playing video game based on the world of Minecraft, developed by Mojang Studios and Double Eleven for Microsoft Windows, Xbox Series X|S & Xbox One One, PlayStation 4, and Nintendo Switch. Xbox Series X|S & Xbox One Game Studios published the game on 26 May 2020. Developers took the franchise into a new direction, presenting players with a dungeon crawler into the ARPG space. It is a hack and slash video game, with simple and linear gameplay, rendered from an isometric perspective, and placed in the Minecraft universe.
Through cutscenes, players find in the beginning the basic plot of the game. There was an Illager named Archie, who found one day the “Orb of Dominance”, a powerful artifact that he uses to control the world. He becomes the Arch-Illager, the evil Illager who invaded the world with his armies and transformed its peaceful inhabitants into his slaves. The ultimate goal of the players is to destroy the Orb of Dominance. This will eliminate the Arch-Illager from its evil influence and will save the world. In the process, players have to fight their way up, as there is a long way until they reach this ultimate goal.
We found many of the elements of the Minecraft universe in the new Dungeons game. It is impossible not to recognize the familiar and unmistakably “blocks” of the Minecraft world. Also some of the inhabitants: villagers, villagers, evokers, or creepers. There are monsters and bosses, puzzles and exploration, many familiar gears. Besides the recognizable blocky world, Dungeons is a completely different kind of video game. There is no sandbox world, but linear gameplay filled with procedurally generated dungeons. Where Minecraft did not set any particular goal, letting players build anything they imagine, Minecraft Dungeons presents a story-driven campaign with the goal of saving the people from Arch-Illager’s evil influence.
This game is closer to Diablo or Torchlight, it is a lite-ARPG. Certainly, Minecraft has legions of fans; after all, they sold 200 million copies of this flagship game. It is comprehensible that branding plays a substantial part, and transferring the Minecraft’s universe to this action role-playing game we have today, is bound to produce good results. However, it is more than this, and Minecraft Dungeons is worth of players’ appreciation on its own merit. Developers created a dungeon crawler using the world of the brick accessible to players of all ages and skills. This is truly a family video game, and parents and children, diehard fans and newcomers, will enjoy this title.
In order to make it so vastly accessible, developers streamlined some of the more complex elements of a classical ARPG. They eliminated the classes, basically, players are able to use any weapons and shields they have. Gearing and optimization are deep, but everybody may start almost immediately playing with a simple character with a sword. It is instantly familiar, as most of the players recognize the world of Minecraft, but also they recognize the hack and slash style of playing. It is about exploring, looting, slashing foes, killing enemies, defending bosses, gearing up, exploring mines, canyons, swamps, discovering treasures, and more.
It is not easy to make a game so widely accessible to so many different players. Especially the age barrier could be a difficult obstacle, as it is the skill level. Minecraft Dungeons is a game that may be played single-player or multiplayer cooperatively, up to 4 players locally or online. There are differences between playing locally and online. While online, players may explore the world on their own, locally they are restrained to a single screen in which all have to be present. If one player falls behind, it will be pop-up on the screen.
Minecraft Dungeons is an amazingly good ARPG video game for all family.