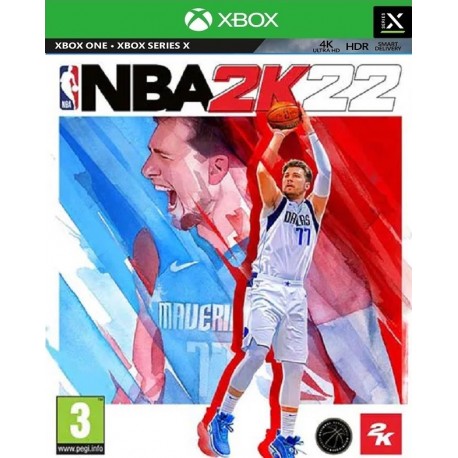 Step Up Your Game
New tactical offense meets an overhauled defense for a more competitive and immersive NBA 2K22. Add skill-based dribbling, shooting, dunking, and alley-oops to your bag of moves and counter them with ferocious blocks and contests on the other end of the court.

All Aboard the Cruise
Set sail on the high seas in the all-new 2K22 Neighbourhood, made for the Xbox One create your perfect MyPlayer, level up for rewards and express yourself through both your game and your style.

New Season, New Discoveries
Can you feel it? Beneath the surface, a rare, legendary power lies dormant, waiting to be unleashed. As a new day dawns with the arrival of Season 5. Power Within, victory, and a trove of rewards await you. Gain inspiration from two-time champion Kevin Durant, 2019 first-round pick Rui Hachimura, and if the prophecy is true, future NBA superstar Paolo Banchero. Are you ready to get started?

NBA 2K22 Has Launched
Death, taxes, and EA Sports releasing the new edition of NBA. Yes, it is that time of year again where these certain things are guaranteed. The gaming community waits with bated breath for the launch of another season of their favorite sports franchise, While NBA professionals get ready to be outraged at their personal stats and exclaim with anguish that they should be much higher.
Well, wait no more, NBA 2K22 has launched, and with comes some clever improvements to its visual performance and a complete change to the balance of its gameplay. To sway the equilibrium of the game away from attack and more to defense EA Sports have made major changes to the shooting mechanism giving them a complete overhaul, where previously autopilot was engaged for shooting now you are presented with two options to tap the button with a greatly reduced chance of success or by using the two sticks, one to aim your shot and the other to fill the power bar making it much harder, but skillful players will immediately see the benefits when they play the game. This complete change of emphasis is refreshing and is carried into other aspects of the game such as dribbling where the focus is constantly needed to display your skills fully.

The rendering of some of the most famous NBA players to ever grace a basketball court is incredible, The Xbox One still has some great improvements to the visual content with clear and tight graphics that bring a realism unlike any previous editions of the world-famous franchise. The now-famous 2KBeats gives you a brilliant eclectic mix of licensed music for you to enjoy, all performed by talented independent artists who have taken their opportunity to shine, and all credit to EA Sports for giving it to them. Just for the Xbox One there has been a major development to the Neighbourhood Mode, It is now set onboard a massive basketball-themed cruise ship, with five entertaining levels for your enjoyment guiding you through these level is your own personal NPC Heather, who is there to help and advise you along the way. She will introduce you to MyCourt on deck 8 of the ship, this is a fully customizable area from the court to the scoreboard and everything else in between including the decorations.

So it is that time of year again and once again EA Sports have not disappointed, with improved graphics, a class soundtrack, and a plethora of additional extras, NBA 2K22 has made key changes to the balance of the gameplay that make it a more realistic competition. As an Xbox One owner, I was not left disappointed with the package and with the Neighbourhood Mode I was pleasantly surprised that EA Sports had done something just for us older gen owners. Who are usually overlooked or ignored completely.