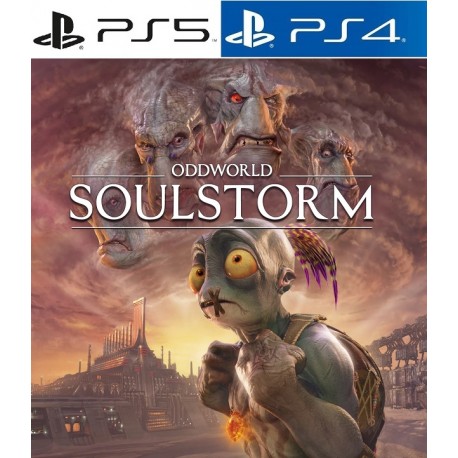 Right from the very first moments, Oddworld Soulstorm is completely different from its predecessors, the introduction of a new inventory system where you take bottles of water, to put out the engulfing flames that are blocking your way to escape from the hordes of Glikkons and Sligs, Our hero Abe can for the first time loot items to craft then use with a sense of control that is uncommon in the platform genre. Also new to the Oddworld franchise are the various offensive options that will not only assist you when solving puzzles but also take out groups of enemies, and set fire to certain environments which can destroy both blockades and combatants alike. Right from its initial PS1 launch Oddworld has become renowned for its alluring animation and its humorous dark comedy, let's face it, it takes a certain kind of mind to make an enemy's death seem quite as hilarious even when it involves being impaled brutally you will still get the giggles at their untimely demise.

They Throw you a Curve Ball
There are an amazing 15 levels for you to conquer plus two secret levels that you have to discover, admittedly the majority are either stealth missions or solving puzzles but every now, and again they throw you a curveball like the moving FeeCo train boss battle or the all-out war against an army of Sligs as you desperately attempt to protect a group of escaping Mudokons. Remember that although you can rush through the game without saving many Mudokons, this will mean that you will not be able to play the two secret levels and the ending to the story will be unhappy.

Oddworld Soulstorm Stands Out
In a world where new cars just look the same, new games all seem much of a muchness, lacking diversity, Oddworld Soulstorm stands out as a great combination of sentiment for the early games and brilliant innovative design and is unique to both the PS4 and PS5. The imagination that has been utilized to create such an amazing level of design of both the characters and environments are so alluring on both types of consoles, with the only major differences being loading times and the quite stunning 60fps graphics, otherwise, the PS4 version is just as enjoyable.

Genuinely a Completely New Game
Following the success of Oddworld New 'N' Tasty which was technically a remake of Oddworld Abe's Oddysee, it was no surprise that they would tackle Oddworld Abe's Exoddus, but you can not call Oddworld Soulstorm a remake as it is genuinely a completely new game. It follows on from New'N'Tasty as the Mudokons as happily enjoying their release from RuptureFarms, but unfortunately, things go array as their settlement gets accidentally burnt to the ground while fleeing Abe is given a mysterious amulet by a dying Mudokon who implores Abe to save the rest of the Mudokons who are being held in factories across the planet who are dying from a strange illness that only Abe can find a cure for. His journey will take Abe to some new and stunning locations and enthralling environments.

The Charm and Dark Humour of the Original
It is so rare that a classic game is updated successfully, Oddworld Inhabitants Inc has not just tried to touch up an existing game, they have completely redesigned both the gameplay mechanics and graphical content, this changes the focus of the game and strips it back the outer shine to reveal the charm and dark humor that the franchise is well known for, then built on that to produce a brand-new game that is fun to play and rewarding to complete. This game will be a template for all future attempts to renew a great franchise.