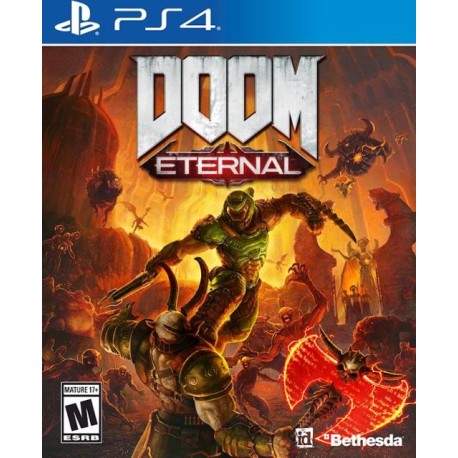 Doom Eternal is a first-person shooter video game developed by id Software (well known for the Wolfenstein, Quake, Rage, and Doom franchises) and published by Bethesda Softworks on 20 March 2020 for Microsoft Windows, Google Stadia, Xbox One and PlayStation 4. It is the long-awaited sequel to the 2016’s FPS Doom and the 5th title of the series. Somehow, id Software comes out with a shooting game that is bigger-and-better, with much larger and denser game levels, more weapons, and more hellish demons. Because it is Doom, we keep it bound to superior standards, and the developers delivered an even faster and brutal video game, with lots of blood and gore.
The story never had a compelling role in Doom games, until now. The developers assume the risk to focus somewhat on the narrative, still taking care to keep the cutscenes shorts so players keep doing the preferred activity: shooting and killing hordes of demons. Players seize once more the role of the Doom Slayer and pick up after the events of 2016’s Doom. Eternal has a clever level design, in which the aggressive demons push the player forward into the story.
Doom players are not in for the story, but for the action, and even if it looks a lot like the Doom we know, there is a major shift in gameplay. This was by far the highest risk assumed by authors of the game who aimed to strike a difficult balance between old and new, retaining and improving the incredible killing mayhem of previous games, but introducing complexity and proposing a new gameplay loop based on resource management. Players will have to take care of their limited resources and prioritize targets in combat, and everything in a continuous fight with hordes of demons threatening Doom Slayer every given second. Eternal is not necessarily an overly linear game, players may want to spend time exploring the game levels and get rewarded with special weapons, ammunition, or 1-Ups. They may also encounter bonus combat scenarios that will bring their own rewards. And all these may be important, as deeper players are in the story, the more difficult it becomes to beat the enemies.
Doom Eternal is rich in content, with twice as many demons types than previous games. Some are familiar (like the Super Heavy demons Archvile, returning from Doom II) or look common (like Tyrant, based on Cyberdemon) to those who enjoyed previous Doom titles, because they are based on demons from past games of the series. Some are new, like the Doom Hunter, a demon specifically designed to hunt the Doom Slayer or Marauder, which is also a playable demon in Doom Eternal's Battlemode.
Speaking of Battlemode, this is one of the multiplayer modes offered by Doom Eternal. It is a 2v1 player vs player game mode, in which two online players select one demon each, from the five available in this mode, and fight the other player that takes the role of Doom Slayer. Another multiplayer mode – “invaders” – will be soon available and will make it possible for one player to control demons and invade some other player’s campaign.
Eternal is no longer a pure shooter, but something better. The players looking for second-by-second action cannot be disappointed, as Doom is that rare game that is constantly and consistently great, without pacing issues, and without breaks in slaughtering demons. Retaining the Doom’s DNA, its main trait, the complexity subtly added just enhances the game. This is probably the best first-person shooter of our times.