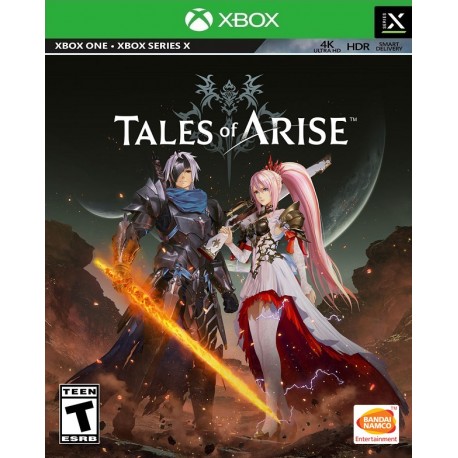 For 300 years, Rena has ruled over Dahna, pillaging the planet of its resources and stripping people of their dignity and freedom. Our tale begins with two people, born on different worlds, each looking to change their fate and create a new future. Featuring a diverse cast of characters, an intuitive and rewarding combat system, and a captivating story set in a lush world worth fighting for, Tales of Arise delivers a first-class JRPG experience.

Since its conception back in the golden age of 1995, the JRPG, the Tales series has been getting better and better, and with this, the 17th installment, titled Tales of Arise, you will be pleased to hear that they have once again hit their mark, with both the gameplay and the style, superseding anything that has gone before. This game will be as popular with players both new and old and is sure to become an instant classic. The Bandai Namco franchise is famous for producing beautifully designed games that are full of intriguing twists and turns, and Tales of the Arise has these in spades plus so much more.

The Subjugated kingdom of Dahnan
The game opens with a cutscene of a sadistic guard about to beat a young slave at a mining facility as the guard is about to land a vicious blow on the cowering youth a masked man steps out and dispatches the guard with a mighty blow and the story of Iron Mask and the tales of Arise commences. The setting for this episode of the franchise is the subjugated kingdom of Dahnan. Conquered by the technologically and magically advanced Renans generations earlier, now its people are used to extract resources to feed the greed of their Renan overlords. Our main protagonist Iron Mask is brought to life by the incredible voice talent of Sean Edward Chiplock, fans who regularly watch and play Japanese anime and video games will instantly recognize his voice as he is responsible for vocally bringing to life many of the English versions.

And so the epic Journey starts, as you take control of Alphen, (his real name as you discover quite soon into the gameplay) He is a man without a memory who does not feel pain which is very useful as the game progresses. Your mission is to free Dahnan, and its downtrodden people, by traveling to the different sectors of the realm and taking on the different lords that rule each one. Along the way you meet up with and befriend various characters who will come with you on your mission, one of these is Shionne Imeris who Alphen is drawn to help as she is being attacked by a group of Renan warriors. The two are quite opposite, Shionne is skeptical and world-weary, whereas Alphen has an almost childlike optimism. The interactions between the two are witty and charming.

Some Excellent Tutorials for the Rookie
With a well-earned reputation for glorious anime animation and interesting plot lines, Bandai Namco have brought this new chapter in the Tales franchise to life in a wonderfully crafted world of extremes, from an arid volcanic wasteland to snowy mountain peaks and lush deep green pastures each visually alluring, well-designed, and each with its own specific tests and trials for you to overcome. There are some excellent tutorials for the rookie that will give you the opportunity to practice your combos without your health bar taking a battering. But not to worry if you don't pick it up immediately as the game has a progressive difficulty mechanic that gradually increases the amount of skill you need to win each contest, so when you start the game you will be able to pull off some incredible moves but as you get further into the game you will have to utilize far better timing to parry attacks and land heavy blows, plus you will need to understand just when to use your companion's special powers to the best effect.

Thought-Provoking, Engaging, and Surprisingly Emotional
Tales of Arise has a storyline that is thought-provoking, engaging, and surprisingly emotional, and you will feel drawn into the fight to free the people of Dahnan. This is surely the best edition that Bandai Namco have developed, it is a major advancement to the franchise while staying loyal to the original concept. Improved graphics (not only with the next-gen consoles) fascinating gameplay, some very clever and witty dialogue, and extra content that is sometimes quite bizarre. The game will quickly become a staple for veterans of JRPG and newcomers to the genre.