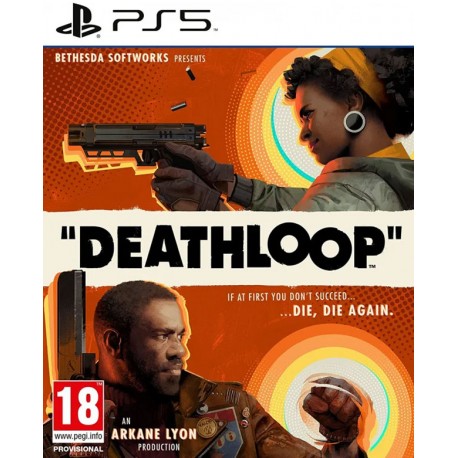 Take Part in the Eternal Struggle Between Two Extraordinary Assassins
As Colt, you will search for a way top put an end to a timeloop that has trapped him on the island of Black Reef, where he is being hunted by the island's locals. Use powerful arms and supernatural abilities to remove your 8 key targets as you traverse the beautiful but dangerous island before the timeloop resets itself. All the time, lying in wait is Julianna, a fellow assassin who's only mission is to stop colt and take him down to keep the cycle going. You have to learn from each loop and refine your search for the best tactics, routes and paths that will enable you to break the time loop once and for all.

Fight For Survival
Arkane Studios are experts when it comes to FPS gameplay and by adding the extra aspect of a timeloop, they successfully introduce urgency and the need for effective problem-solving as you fight for survival as you hunt and are hunted all at the same time as you indulge yourself in one of the best First Person Action games. You have a selection of brutal weapons and some strange, otherworldly powers at your disposal. Play the game in your own style, be it using stealth to achieve your aim or to unleash your fury as you blast away any opposition that stands in your way.

The Haptic Feedback Adds Another Dimension
Every loop is a chance to adapt and learn from your previous mistakes, Deathloop forces you to adapt your plan and revise it, by discovering hints and finding clues to fatally remove your targets quickly and efficiently before the day resets itself, and you are once again thrown back into the loop. Study relationships and schedules as you do whatever is required to get the vital information that will enable you to devise the best tactics to reach your targets in time and finally break the spell. The Next-Gen PS5 brings Arkane's vision to life. The 1960s based style that is permeates the stunning island of Black Reef is brought to life in wonderful 4K at an impressive 60FPS with HDR produces clean and crisp graphics and a reality that few can match. The good news is that if you die you will not need to endlessly wait for the loading screen to do its job, PS5's ultra-high speed SSD means that loading times are greatly reduced to just a few seconds. The DualSense controller comes into its own with Deathloop, the haptic feedback adds another dimension, from the sensation of Colt's footsteps to the varied resistance that each weapon trigger has, you can actually feel the kickback while firing at an enemy. It can even warn you if your gun jams. It is nice that, as well as the visual and audio (which are both fantastic), a sense of touch naturally becomes part of your gameplay experience.

Part Ground Hog Day, Part Edge of Tomorrow
Arkane have really rolled out the barrel with this final collaboration with Sony Studios, This part Ground Hog Day, part Edge of Tomorrow style thriller is genuinely innovative and enthralling. Fantastic visuals and realistic sound add to the unique atmosphere, while the subtle twists of the loop being reset, and the spanner in the works that is the ever determined Juliana, will keep you on your toes throughout the game, and never really gives you a chance to relax completely. With a certain charm and witty voice acting, Deathloop is exclusive to the PS5, which has the processing power and technical abilities to really present the game exactly as it was meant to be.