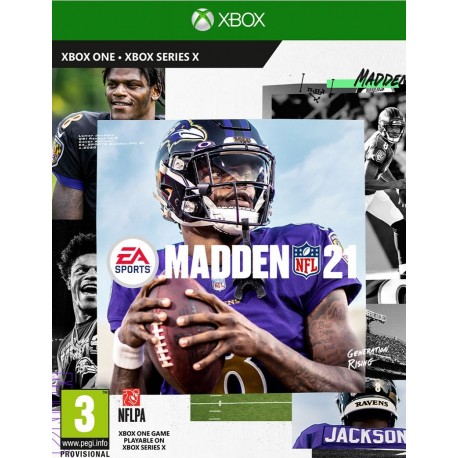 Madden NFL 21 has a Dual Entitlement that includes Xbox One X and Xbox Series X|S Xbox Games.
So, Rise To Fame in Madden NFL 21.

A new generation is leaving its mark on the NFL. Will you be able to rise to the occasion? Change the game and take complete control of your legacy.

Pulls Another Great New Mode Out of the Bag
I have had the chance to look at the exciting new modes that come with Madden NFL 21, as one of the games that for me fall into the saying, there are two things in life you can be sure of, and that is death and taxes category, Madden NFL always seems to pull another great new mode out of the bag just in time for the game's release. This year's offering is the innovative, The Yard. This is a wonderful way to create and customize your very own personally designed avatar, with it, you can now express your individuality and build a player that represents you. You can deck out your avatar in some of the freshest gear that has ever appeared in any of the past editions of Madden NFL you can collect Rep to build your Rank as you advance through the levels and then earn Cred to unlock even more fantastic stuff, Cred is the all-new currency that is available in The Yard. You can earn Cred by tackling various tricky challenges and by amassing points and wins. The Gear Store is where you go to swap out your avatar with some of the best cosmetics that the game has ever seen, so build your Rep, rise through the ranks of Madden fans and hold the bragging rights with all your mates and against gamers from all over the planet

Troops Can Have Some Relaxing Downtime
There have been some new places added that are designed just for The Yard, in some stunning places around the world. Imagine playing a casual game of 6v6 football right in front of the iconic Brandenburg Gate, to reflect the way that the NFL has expanded internationally all across the world, especially in Europe where it has gained a strong foothold, with some genuine popularity in Germany, thus they have included this special festival that is especially for those European fans. So scrum down in front of the legendary arch and enjoy this special showcase of the great game that has some of the greatest ever teams and likewise some memorable players to choose from. Then there is Forward Operating Base Nico which is a classified top-secret location as it is the host to America's armed special forces and where these troops can have some relaxing downtime on a rough and ready pitch, throwing a ball and having a little intense competition never hurt anybody, much, then you can test yourself against some of the greatest players that the NFL has ever seen.

Totally Refreshes the Franchise
With the evident upgrades in quality that the Next-Gen consoles give you, familiar gameplay and updated rosters that come with Madden NFL 21 but add to that the brand new The Yard which is so much fun to play and very rewarding with the new monetary system the Cred, there is so much brilliant stuff to deck out your avatar with and interesting places to play. Madden NFL 21 refreshes the franchise and prepares it for the next-gen revolution that is on its way.