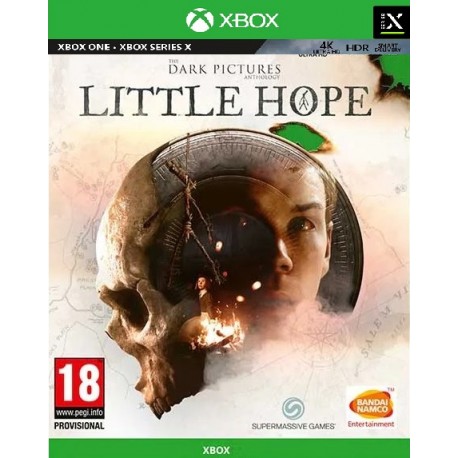 The Dark Pictures Anthology is an intriguing series of incredibly intense, stand-alone, and branching cinematic horror games that can be played in both single-player and multiplayer modes, in the case of this latest release for Xbox Series X|S and Xbox One, Little Hope the game follows four young college students and their professor who have become stranded in a small abandoned town called the titular name Little Hope, they are ensnared thereby an impenetrable thick fog as they desperately attempt to escape the trap that they are held in, they are constantly plagued by petrifying visions from the past. Can they discover the reason why they are being haunted by these horrific apparitions before the forces of evil that encompass them can drag their tortured souls down to hell? The alarming visions that haunt them seem to reflect the events of the 17th century Andover Witch Trials, from which they must escape the ghostly figures that stalk them through the dense fog. Can they survive or will it be a case of abandoning hope ... all who enter here!

There is Something Lurking That Could be Deadly
The blood-pumping adrenaline-fuelled opening prologue of The Dark Pictures Anthology Little Hope sees our five main characters involved in a terrible bus crash that leaves them both injured and isolated just outside the aforementioned small town, as they seek assistance they are drawn to the abandoned settlement and quickly realize that behind the thick fog that enshrouds them something is lurking that could be deadly. For the majority of the game, you will play as the natural leader of the group, Andrew, who is brought to life by the incredible voice talent of the inimitable Will Poulter. Supermassive has gained a reputation of being the master of the genre as the other offerings in the series, not jump out of your chair, miss a heartbeat scary, the game is full of suspense, rising tensions, and an urge to investigate but most of all a need to survive.

Derelict Houses, Ominous Woodland Paths, and Spooky Graveyards
The main characters in this engrossing tale are Andrew and John his teacher, these two spend a considerable time together and seem to have similar traits but as this is a game of constant choices during the game's progression you will decide if the pair keep their harmonious relationship as it does with the other college students in peril, Angela, Daniel, and Taylor. In fact, you won't only decide their interactions but in some cases their fate as well. The plot has many twists and turns most of which I can't reveal here as it will spoil the game, but what I can say is that the story reverts from the present to the historical and tortuous past of the village and back again, The haunting well-detailed environments of derelict houses, ominous woodland paths and spooky graveyards and fog, lots and lots of fog, create tension as you explore, collect items read diaries and use your skills to put the pieces together and discover the truth of why the town is haunted. With so much to reveal, like me, you might find yourself replaying the games with the benefit of hindsight that gave me a whole new experience to enjoy.