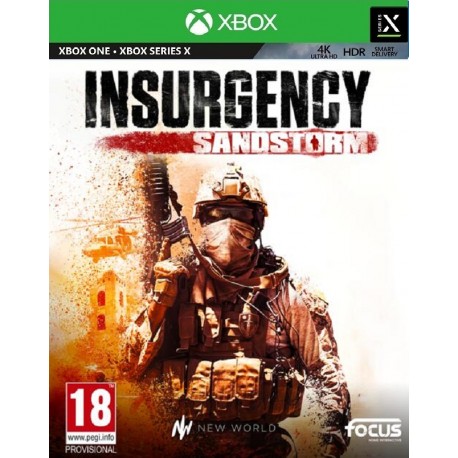 Immerse yourself in modern realistic gunfights with the ultimate tactical First-Person Shooters designed for your console. Fight in the desolate arenas of contemporary conflict through intense cooperative and combative multiplayer modes. With unrivaled immersion, feel every bullet and fear every impact in fierce close-quarter combat.
Deaths are fast, manage your ammunition well, and use tactics and team play to go through the scenarios in search of victory. Coordinate fire support with your team and fight shoulder to shoulder in gripping action.

Competing against the big boys of gaming is never going to be an easy task, but New World Interactive have taken the bull by the horns with their latest offering for the FPS market. With Insurgency: Sandstorm has been developed to bring the full brutality of modern combat to your console, Designed for the Xbox One and Xbox Series X|S, most of the genre ignore the reality that just one bullet, and it is game over, whereas Insurgency: Sandstorm places a very high value on your life which makes you more cautious and methodical in your approach to combat situations just like in the real world, which adds tension to every scenario.

A Whole New Dimension to Sound Design
New World Interactive the developers of Insurgency: Sandstorm must have spent a lot of their time creating an astounding sound design, with incredible echolocation abilities we suggest that you use 3D headphones to get the full experience. Gunfire is amazingly realistic to the point that you can not only determine what sort of weapon is firing at you but also from what direction they are coming from. Explosions will leave your ears ringing, but combine that with the subtlety of being able to hear footsteps coming down the hallway or distant voices from around the corner. New World Interactive has added a whole new dimension to sound design.

This Game is Not About Speed
In Insurgency: Sandstorm, authenticity is the key. Any elite squad of soldiers would tell you in no uncertain terms that patiently following the tactics that you were trained in is key to surviving any mission, people who rush into battle tend to be carried off the battlefield feet first, caution and being thorough will keep you alive to fight another day. This game is not about speed, It involves accuracy and strategy to succeed in this FPS By using Flanking Maneuvers, Pincer Movements, and Choke Points in your engagements with the enemy you will greatly increase your chances of coming out of each scenario alive.

Call in an Airstrike
Thinking outside the box New World Interactive has made Insurgency: Sandstorm much more than just one shot kills and tactical gameplay, they have thrown in some great additions, impassable up ahead, the enemy is too well-positioned to get past them, then call in an airstrike, players can direct air support on to their position with devastating effect, the same when the enemy is entrenched, your Commander can become a spotter for a precise destructive artillery bombardment that will clear out any opposition from the most fortified location. So to round up, Great gameplay, fantastic, intuitive, multiplayer modes, a sophisticated AI, a brilliant inventory of weapons and gadgets, and superb graphics that have a high FPS and 4K resolution. As the first outing on console, Insurgency: Sandstorm has been very enjoyable and has left me wanting more.