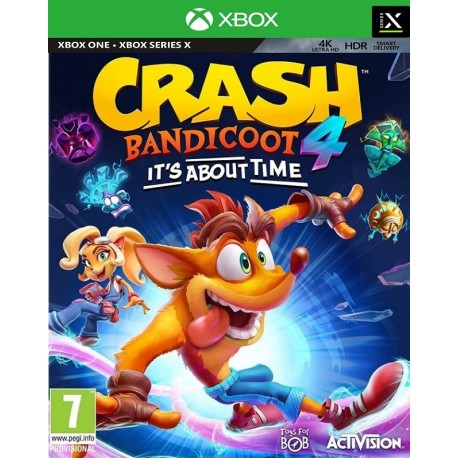 It's About Time, For a brand-wumping new Crash Bandicoot™ game! Crash forward into a time-shattering adventure with the world's most famous marsupials. Neo Cortex and N. Tropy are back at it again, they are launching an all-out assault on not just this universe, but the entire multiverse! Crash and Coco are here to save the day by reuniting the four Quantum Masks and bending the rules of reality. New abilities available, More playable characters, of course, Alternate dimensions, New ridonkulous bosses, and the same awesome sauce that we have grown to love with Crash Bandicoot™.

Zany Characters and Addictive Platforming Action
Toys for Bob who are the ingenious developers of Crash Bandicoot 4: It’s About Time to do something quite unusual, that is concentrating on the great gameplay that was the backbone of the first three games and then fusing it with all new aspects that still pay homage to the Naughty Dog trilogy and excludes anything after that, a bit like the latest Ghostbusters film that totally ignored the all-female cast film as if it never existed, but instead used the first three films for inspiration. So all the zany characters and the addictive platforming action are there by the bucket load, when combined with the fresher aspects fit seamlessly and give you the game that Crash Bandicoot was always supposed to be. The plot follows on from where Crash Bandicoot Warped left off, our two legendary bad guys reappear after a prison break out Neo Cortex and N. Tropy and join up with Uka-Uka to do what the villains always do, come up with a cunning plot to take over not only the universe but the entire multiverse as well. If I were to ask you to pick for me the best things about the series that you enjoyed the most, I am sure that the self-aware humor that has become synonymous with the Crash Bandicoot franchise will be somewhere near the top of the list and Toys for Bob haven't missed out on the opportunity to exploit that fondness by having it in bucket loads, an amusing script that is self-aware, tells a funny and entertaining story in a manner that you will find almost nostalgic.

Special Powers that can Alter the Laws of Physics
One thing that Crash Bandicoot 4: It’s About Time cannot be accused of is that they have cut back on ingenious ways to kill you, There are so many, another new introduction is the Idea of the characters of the four Quantum Masks, each of the masks has their own individual character and rewards you with a special power that can alter the laws of physics. Firstly there is Ika-Ika the Mask of Gravity that will flip your world over and will have you running across the ceiling. Kupana-Wa is the Mask of Time that benefits you when facing speedy platforms which slow down to a more manageable velocity and likewise with faster enemies, which you can then dodge out of the way. Akano known as the Mask of Matter gives Crash the ability to spin violently, the spinning allows you to hover and glide to reach further platforms, or as you proceed from one platform to another. And finally, the Mask of Space called Lani-Loni with this mask you will be able to amazingly Phase through objects and barriers with ease. As the four masks are living things, they each have completely different personas for you to cope with. Crash Bandicoot 4: It’s About Time also introduces the player to some new ways of traveling across the platforms, like rope swinging, grinding on colorful rails, and wall-running, which are not new to platform games but are totally new to the Crash Bandicoot franchise. These extra forms of moving to take nothing away from the fundamentals of timing and precision. Veterans of the Franchise are going to appreciate the revamped bits and the classic gameplay, and newcomers are lucky that they get to play the best Crash Bandicoot game as their first experience.