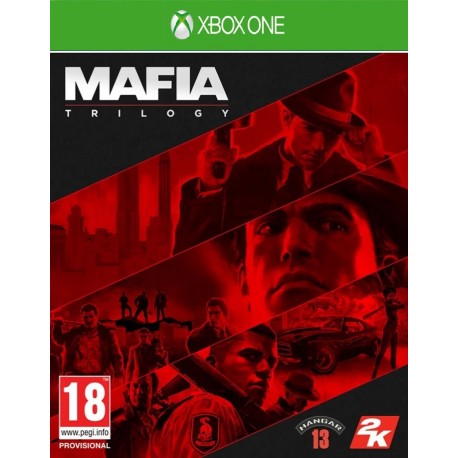 Mafia: Trilogy  Xbox Series X|S & Xbox One brings together Mafia, Mafia II, and Mafia III, the well-known series of action-adventure video games, depicting the American world of organized crime over three different eras in history. The first two video games are developed by the Czech company 2K, the first one in 2002 (2K was known as Illusion Softworks), and the second in 2010. Mafia III is developed by Hangar 13, and come out in 2016. The first game is published by Gathering of Developers, all the rest, including the Trilogy, are published by 2K Games. With the new edition of Mafia: Trilogy, Hangar 13 extended the third game of the series, remastered the second, and remade the first one. The Trilogy includes all DLC previously released. For the first time players have the chance to play all games in 4K and up-to-date technical conditions.
Mafia offers realistic open-world action-adventure gangster gameplay, it is all about organized crime. The player assumes the role of a criminal ready to do whatever is necessary to rise through ranks of criminal organizations. The motivation may be different - the sense of belonging, greed, or need for revenge - but the goal remains the same - moving up the ranks. In order to do so, the player character will have to accept criminal missions from mafia figures or friends and complete them to progress through the game and move the storyline further. The enemies are various game characters who stay in his way or have wronged one way or another the player’s character.
Mafia has style and class, great storyline, and superb graphics. It is as cinematic as it can a game be. The atmosphere of those times is re-created admirably and the gameplay brings the life of a gangster to your console in an addictive way. The graphic of the cities draws inspiration from real cities of that time, as well as the vehicles (even if when unlicensed, they just look-like the cars of that era), arms, sounds, and music.
The first Mafia game is set in the prohibition period and we can experience the 30s in the fictitious American city of Lost Heaven. The storyline is inspired by the life of mobster “Tommy” Angelo and the Salieri Family. The second Mafia game brings as in the atmosphere of the 40s – early 50s, where we move through the streets of the fictitious city Empire Bay. The storyline is inspired by the experience of Vito Scaletta, a Sicilian immigrant that avoids jail by enrolling in the U.S. Army and returns from World War II. The third Mafia game set us in the atmosphere of the 60s, in the virtual city of New Bordeaux. Players assume the role of a Vietnam veteran that is seeking revenge against the local mobs who killed his family.
Mafia games are set in open-world environments and played from a third-person perspective. They recreate the atmosphere of the period with landmarks, architectural styles, public transportations, or cars influenced by real-life American cities of that time. The sound and music are also contributing to the success of these blockbusters. With missions as hitman, enforcer, getaway driver, using force or stealth (in the last game), Mafia games are among the best games of the genre. Now, Mafia: Trilogy brings all the games in a single packet, updated, upgraded, expanded, and improved.