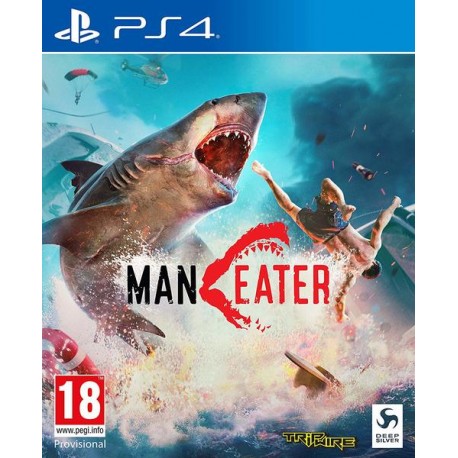 Maneater is an action role-playing video game developed and published on 22 May 2020 by Tripwire Interactive for PlayStation 4, Xbox One, and Microsoft Windows. A Nintendo version is also in the works and should be out by the end of the year. Think Maneater as a shark RPG. It is a unique idea to offer players an underwater open-world environment to explore from the perspective of a female baby bull shark. “Eat. Explore. Evolve”. This video game distinguishes itself from its amazing ocean exploration and evolving system. Players start with the baby shark, but it will evolve into a massive shark during hours of gameplay where you have to complete missions, quests, fight other predators, or kill humans.
The story is not particularly important in this game, but it is well executed and reminiscent of Moby Dick. A famous shark hunter named “Scaly Pete” is the main antagonist of our shark. Their stories are intertwined because the fisherman is the person who killed the hero’s mother and while pregnant with the infant shark. In the process of cutting out the pup sharp from its mother’s belly, Pete lost his hand. From now on, it is up to players to narrate the story from the point of view of the fish. There are beautiful cutscenes, even if some are not quite related to our shark, and an in-game reality television show called “Shark Hunters vs Maneaters”, with Scaly Pete as its main star.
The gameplay may seem simple with repetitive missions, but it is not boring at all due to the evolving system. Players start with a pup shark, but she is continuously evolving, she grows and develops new skills and powers that will allow her to battle new and stronger enemies, until then unbeatable. The exploration is not limited in the underwater open-world, but players will not be able to explore the ocean at will as each area has an apex predator that is patrolling it. Entering these areas will incur many dangers and the risk of ending up dead. As a result, players have to focus on growing first, and exploration later.
In order to grow, our shark has to eat, and players will start the process with small fishes, like mackerel, and progress through the food chain, literally eating their way up. Very soon, our shark will eat fish, turtles, seals, crocodiles, and other ocean wildlife; but also ocean waste, like road signs, plates, and various chemical wastes, that far from killing our shark, they bring substantial bonuses. Finally, our shark will eat humans, and the main dish is the shark hunters.
The shark physics is unique and it evolves with your character. It is one thing to maneuver a small shark and another thing to control a huge beast. There are five life stages: baby, teen, adult, elder, and mega. Everything the shark eats makes it grow bigger. Reaching a certain growth will switch the life stage. Physics are different and react not only to stages but also to the growth.
Let’s not forget that Maneater is an RPG, and as a result, players may improve their character. There are three paths of evolution: Bio-Electric, Bone, and Shadow. Players may upgrade and improve their shark character during the game in the chosen class (Body Evolution). The five parts of the shark that players may upgrade are head, body, tail, fins, and mouth. Each evolution path is different from the other, with different abilities and powers. Each upgrade brings something new, so the gameplay changes continuously.
Maneater is a unique game with addictive gameplay. It is quirky, entertaining, and comical. It feels like a B-movie, but this is a plus. To experience life from the perspective of a shark and explore the underwater environments is an interesting proposition.