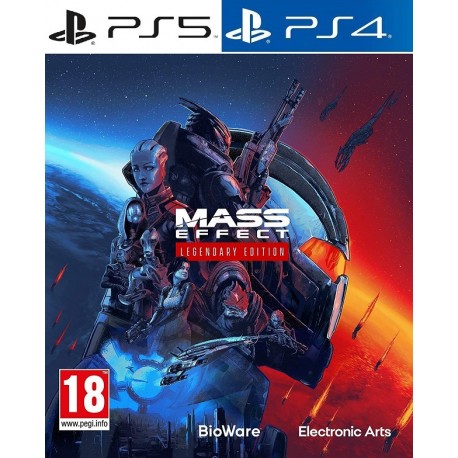 Only one man stands against humanity's greatest, deadly threat, unlike anything they have ever faced you will relive the now-famous legend of Commander Shepard in the much-touted and highly praised, Mass Effect™ Legendary Edition. It includes single-player base content and over 40 DLC from Mass Effect, Mass Effect 2, and Mass Effect 3 games, It includes promo weapons, armor, and packs, remastered and optimized for 4K Ultra HD. For the first time, you can relive the cinematic saga with its exciting, thrilling action that is combined with an enthralling, interactive storyline that gives you the freedom to decide how your individual tale will unfold. Create and customize your own unique character, from his appearance and skills to a totally personalized arsenal, then you take command of your elite recon squad to fight across a galaxy that is in turmoil. These choices will seamlessly travel across from one game to the next with you. Each decision you make will decide the outcome of every mission, every relationship, every combat, and even the fate of the galaxy itself.

The Gold Standard of RPG Games
BioWare brought out the original Mass Effect 1 way back in 2007, and it quickly became the gold standard of RPG games, but as the game was developed for the PS3 with clumsy combat gameplay and disturbingly unreliable weapons, so you can imagine the studio was left with the dilemma of how far it should go to update and optimize the classic game without spoiling the memory that older gamers still remember and love, by not going far enough they also would alienate newcomers, so it is nice to say that they achieved the balance necessary to actually make both very happy. There are several tweaks that they have made to the gameplay, such as more cover and the freedom to use any of the weapons in your arsenal are but two, no matter the game is still challenging and no amount of changes will stop you from being wiped out at regular intervals, especially on the higher difficulty levels. Mass Effect™ Legendary Edition somehow manages to combine the smoother gameplay of the later titles with the still clunky action of the original. Overall the upgrades to the visual elements with or without a next-gen console are enhanced, the visuals are just enough to make a one-time average graphical game really quite pretty and bring Mass Effect 1 up to the high standard of modern games.

Return to the Unforgettable Universe
BioWare has made a wonderful return to greatness with Mass Effect™ Legendary Edition. As most of us are aware competing against the fondness of a memory is never going to be easy, thankfully BioWare has paid respect to the original games then they have added those clever technological improvements that they have become famous for. You will make a fond return to the unforgettable universe that shaped your gaming education but this time with improved gameplay, subtle changes to the iconic graphics that still maintain all the character of the original all in stunning 4K HD. Mass Effect™ Legendary Edition has literally hundreds upon hundreds of hours of exciting activities for you to experience, whether as a complete novice or as an experienced player who is still blaming the bald patch on the original game.