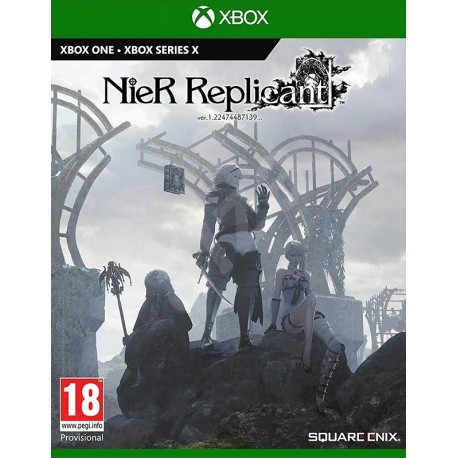 Released in 2010 the original game was first published in Japan then retitled NieR Gestalt for the PlayStation 3 in the west and became a classic FPS title, so it is no surprise that Square Enix was encouraged to release an updated and upgraded version. The storyline is essentially the same except the main character of our tales has changed from a father attempting to save his daughter from the Black Scrawl, a plague that has spread between the remnants of the human race, to the new game where it is a dedicated brother NieR who is desperately searching for a cure for his infected sister Yonah. To aid him on his quest is Kanie a scantily dressed foul-mouthed monster masher who also carries the infection, Emil, a small boy that has the ability to turn organic matter into rock and finally the magical book Grimoire Weiss who is said to have the key to unlock the deadly infection if only he could remember what it was. There are some great opportunities to play as each character as the game progresses.

Find a Cure for the Black Scrawl
The world of NieR is a dystopian nightmare that has the ultimate survivors of the population gathered in small towns and villages, each of these you will visit seeking clues to finding a cure for the Black Scrawl before it consumes the whole of the population. It is in these communities that you will be given side missions where you will be asked to find a missing object or to take out deadly enemies that are causing grief locally. You will be rewarded for your endeavor with new weapons items and granted access to new locations. Deserts, a rubbish tip, and beautiful green fields are just some of the stunning locations that individually have abundant wildlife to hunt and collect raw materials from, fishing spots, and metal collection points to help increase your resources. Try not to forget that they are also packed full of the Shade, your main enemy that lie in wait and attack in force when they get the opportunity.

Prego. È stato un piacereWhere the game comes into its own is with the new and improved gameplay, ask anyone who played the original game, and they will tell you that it was unresponsive, clunky, and slow with the word frustrating thrown in there somewhere, well with NieR Replicant ver.1.22474487139 you can forget all of those negative experiences as now it is silky smooth, fluid, and enjoyable to play, just wait till you deflect a blow that was just about to strike you or dodge an incoming attack to perfection the feeling of smug satisfaction that you feel is incomparable. The game has a modern feel now as the action is brought dramatically up to date. Outside the many melee attacks, there is also the support that you get from the magic book Grimoire Weiss who can take out hordes of enemies with his magical melee moves, I prefer his ranged attacks of launching lethal spears or energy blasts at enemies from afar which compliments my battle style. There is a new system that will reward you for disposing of the Shade by giving you increased physical damage or a higher item drop rate so that you will be able to access those elusive upgrades that you were searching for.

Stunning Upgrades to the Visuals
Great and testing bosses to keep you engaged, knowing that you have to find individual methods of defeating each big boss and the effective type of attack to master to gain glory. Stunning upgrades to the visuals keep the original style but make the images sharper and more detailed, working equally well on both the PS4 and PS5 consoles. Audio-wise, a memorable soundtrack is enhanced by great voice talent and a convincing script that is as good as anything that I have heard. It is rare that you get to experience a game exactly how it was meant to be enjoyed, so take this opportunity to play this great game at its best.