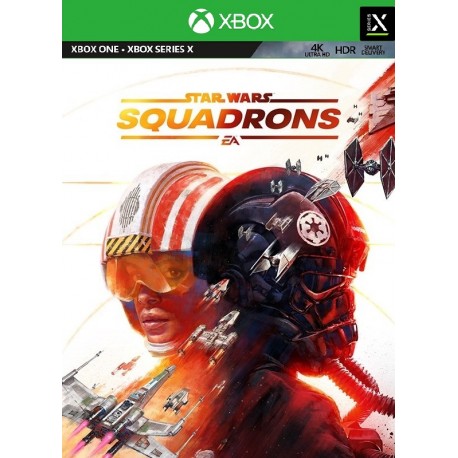 Master the art of starfighter combat in this realistic piloting experience, STAR WARS™ Squadrons buckle up and feel the adrenaline rush of multiplayer dog fights in space alongside your squadron. Take control of various starfighters from both sides of the conflict, New Republic X-wings and The Imperial fleet's TIE fighters to name but two, customize the load-outs and designs, and distribute your ship's power between the weapons, shields, and engines, while you immerse yourself in your starfighters cockpit and compete in intense 5v5 dogfights, unite with your squadron and tip the balance in massive fleet battles to experience a unique STAR WARS™ story. Discover what it really means to be a top pilot in the exciting STAR WARS™ Squadrons exciting solo-player story, that takes place just after the events of Return of the Jedi, in a twist you can see both sides of the conflict as the plot alternates its perspective from faction's side of the battle to the other. The New Republic fights for freedom and justice, and the empire aims to create order. We need you to join the galaxy's finest.

Getting a TIE Fighter in my Sights
As a fan of anything to do with STAR WARS™ I have to admit that I went into this game with great expectations, with a desire to live out my childhood ambition of actually flying an X-Wing into combat against the might of the Imperial Empire, just the thought of getting a TIE fighter in my sights as my wingman covers my attack makes me overflow with excitement, so can STAR WARS™ Squadrons live up to my lofty expectations? The answer is a resounding YES, and much more, for example, I not only get to fly the iconic X-Wing but also the stalwart Y-Wing and the electric fast A-Wing, then they blow my mind by giving me a great selection of TIE ships to enjoy as well, TIE Fighter, TIE SA Bomber, and the deadly TIE RP Reaper and more give you an idea of what it is like to be an Imperial pilot also, so it is double the fun. Missions are either based on the point of view of a member of Vanguard Squadron from the New Republic or Titan Squadron representing the Imperial forces, you alternate from one to the other giving you the perspective of both sides of the conflict.

Interact with Members of Your Squadron
The best thing about STAR WARS™ Squadrons is not its exciting missions or the 70s style perfect designs of the ships, but the realistic and amazingly stunning environments that each battle is fought in, whether it is a colorful nebula with its dramatic lightning storms or, one case, the remnants of a partially destroyed moon, there is even a Star Destroyer graveyard. With or without the brilliant next-gen improvements, the environments allow each player to enjoy both the famous locations from the franchise and gorgeous new ones. Between missions, you can interact with members of your squadron to reveal more information about each pilot in your group and their personal characteristics and assess their abilities to determine how they can fit into your battle plan. I love STAR WARS™ and after years of coming close, I finally have found a game that makes my ambitions to be an elite pilot and turns them into a reality.