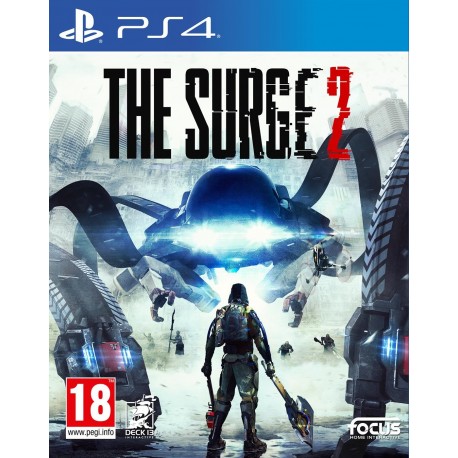 The battle and mystery unravel when your plane is shot down on your way to Jericho City and the brutal melee begins in the outskirts of the city. You wake up in a deserted facility weeks after the mysterious storm destroyed your plane - the brutal combat begins when you start exploring the ruins of the city under a dark, expanding nano storm.

Build your character as strong as you can since you will have to defeat soldiers that enforce Martial law and ferocious robots that now rule Jericho City. The bid to survive is vicious and unforgiving since you have to steal valuable equipment in a ruthless battle, ripping off and slashing the limbs of your opponents and enforcing your character with an expanded arsenal of weapons and abilities.

Dive into the unmerciful melee and find the most hardcore armors and implants to become stronger in the face of remorseless enemies lurking around and trying to destroy you. The baffling world of The Surge 2 is now expanded, more vivid and complex, and surrounds you with more ambitious and varied secrets that will flood you with an apocalyptic sensation of challenging colossal bosses.

Your progression in this fascinating universe of hostility and assault will depend on your capacity to enhance your character using futuristic abilities, drones and insertions to solve the mystery that unfolds in your blurry visions from the night of the crash. The quarantined city dooms you to constantly fight everything around you that is now infected with this malicious nanotechnology and needs to be killed.

The experience of the game is a strategic use of weaponry and stamina management and also the intelligent read of opponents and their attacks. You can defeat enemies that are fast and aggressive or you can follow and kill slow and defensive opponents. Also, you have to wisely choose between the weapons shuffled in one or two hands and wisely calculate when to commit to an attack and when to retreat and recover.

The intelligent use of every type of equipment needs to be adapted to the specific kind of damage that you want to inflict. Each type of armament has different unique items that differ in stamina consumption or speed and are particularly suited for certain situations or enemies.

The Surge 2 feels skillful, smart and flexible and is worth the effort of thinking and taking every fight and every side quest to reach the end of an incredible story.