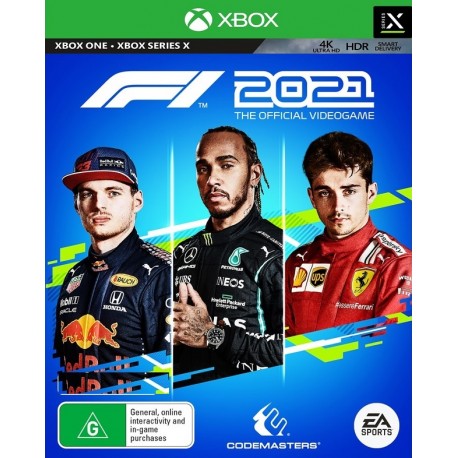 Formula 1® returns to Xbox for the 2021 F1® season. There are some great new aspects to the game for you to enjoy, there is an exciting new storyline to follow in the Breaking Point experience, the new two player Career Mode, while the Real Season Start will put you on the front of the grid. Put yourself in the centre of the greatest racing game on earth, compete against all the 20 skilled and brave drivers in 10 world-famous teams that compete in the 2021 F1® season. Race online with interchangeable racing liveries in social competitions and races in ranked events, there is an all new Quick Join format, leagues and weekly events. You can join the unique F2 competition in a short, medium, or a full season options including 2020 and 2021 season content.

F1® 2021 Xbox Series X|S Special Features
there are a number of enhanced features that are only available on the Xbox Series X|S consoles, the increased frame rate, in F1® during racing, every moment really counts and with a stunning up to 120 FPS it delivers sensational clear and tight graphics the sensation of speed and exciting, realistic racing simulation which has never been seen in the franchise before, all this in amazing 4K Ultra HD with compatible equipment. Xbox Series X|S uses all of its incredible processing power to vastly reduce those annoying loading times, making them near instantaneous.

Through the Eyes of Two Teammates
I think the best new addition to F1® 2021 is the engrossing Breaking Point, a scripted storyline plot that details the season through the eyes of two teammates driving for a F1® team. A novice driver Aiden Jackson and the veteran Casper Akkerman it takes place over two F1® seasons the first through the eyes of Aiden the rookie and the second is from the perspective of Casper, it is a tale of the interaction with two distinctive points of view and plays on the young newcomer and grizzled veteran genre as they are both teammates and competitors alike. Follow them as they begin a new season, of which you will race in selected races, where you will have to complete some tricky tasks namely racing at the utter limit in a time fast enough to achieve the set target.

The Most Realistic of Any Produced
If you wondered whether it was possible for Codemasters to advance the F1® franchise and make it better? Well, the answer is a resounding yes. They have worked hard to update the graphics to the now high resolution offering that we see today. F1® 2021 gives you the realistic experience on both the Xbox One and Xbox Series X|S Consoles. The new concept of Breaking Point brings something unique and fresh to the F1® 2021 package It will give you a whole new understanding of the Formula 1® world, and you will get an insight into the life of a professional racing driver. Old favourites like the much loved.
Career Mode makes a return, so expect to be driving on the limit of your ability and to push your car onto the front row of the grid in preparation for the big race. You can get involved in rated leagues, social events and weekly competitions using the new Quick Join feature. As the first outing for Codemasters since they joined up with EA Sports, this edition of the iconic racing simulation is the most realistic of any produced. Can you get to the end of the season as the champion? Not if Michael Massey has anything to do with it.