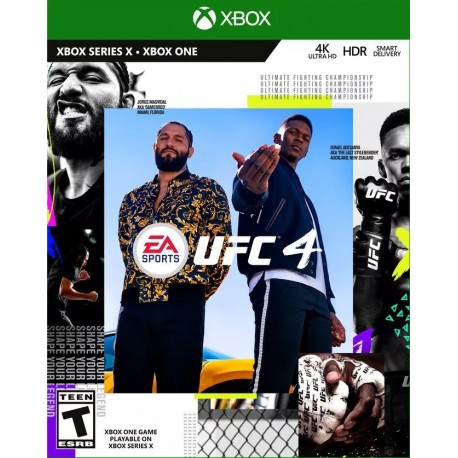 The warrior that you have become is governed by your personal fighting style, your incredible achievements, and your determined personality. Develop and customize your character with a unified progression system that adapts across all the modes in EA Sports UFC 4. Rise from unknown amateur to a major UFC superstar in the all-new Career Mode, experience the origins of combat sports in two all-new environments, called The Kumite and The Backyard or you can challenge the world in new Blitz Battles or online World Championships to become the undisputed champion of the world. In the gameplay, fluid clinch to strike combinations offer a more intuitive and realistic stand-up gameplay, while the overhauled take-down and ground mechanics deliver more control in those key phases of the fight. No matter how or where you play it, EA Sports UFC 4 puts You at the center of every fight.

Introduces us to Real Player Motion Technology
UFC 4 introduces us to Real Player Motion Technology (RPM Tech) into the art of the clinch, which creates a more fluid experience driven by positioning and physical context, the RPM Tech is also involved in the take-down gameplay as well, and there are a plethora of new takedown animations, players will feel a much larger amount of outcomes, that is driven by user control and the fighters attributes. Finding different ways to inflict serious damage while on the ground has become the hallmark of some of the UFC's finest. With a ground and pound overhaul, UFC 4 places you in greater control of postured-up scenarios, giving the striker more effective tools to aim and choose their spots and the defender has access to more tools like head movement and well-timed counter manoeuvrers. Fight it out in the backyard or be immersed in the fabled tradition of the Kumite, both are possible options in the all-new locations of UFC 4. Plus, you can battle it out at UFC Apex and Action Avenue. Whether it is the backyard brawlers or the underground warriors that inspire you, your personal fighting style will be molded and shaped by these new immersive environments.

The Combat System is Split Up into 3 Distinct Areas
UFC 4 is the number 1 mixed martial arts game that has been developed by EA in Vancouver, its combat system is split up into 3 distinct areas, Stand up, Clinches, and the Ground game. The Stand up is similar to its predecessor with the fluidity and the satisfaction you get with the jabs, hooks, and uppercuts plus the huge amount of other moves that are at your disposal via the multi-button combos, these combinations are easy to pull off, and you can duck and weave, block and of course taunt your enemy mercilessly. The major feature upgrade of UFC 4 comes with the clinching system mechanics, before when you played, the clinches were very slow and clunky as they lacked any sort of fluidity, but in this edition, you can now go seamlessly from stand up striking to clinch striking without there being any noticeable hesitation. EA Sports UFC 4 is a sports SIM of the highest quality that naturally recreates the multiple disciplines that are needed to be the best in the mixed martial arts arena, it does a great job of completely immersing you in the hard-knock world of MMA, fight your way up from rookie to MMA superstar. Whole new systems improve the experience incredibly and make the game even more enjoyable and realistic than it has ever been before.