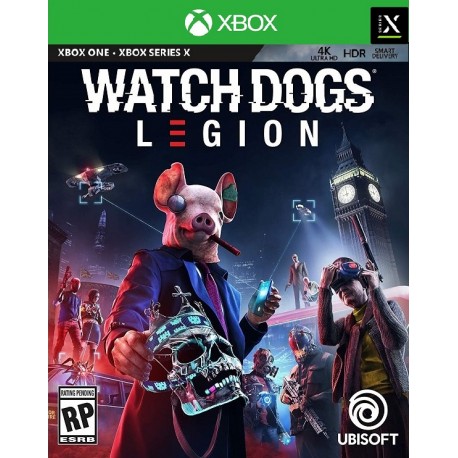 London, set in the soon-to-be future, has been rocked and is facing its downfall after a series of disastrous attacks by terrorists, causing fear and paranoia to run rife. An authoritarian electronic surveillance obsessed state is oppressing the public, a military corporation that has no compassion or morals, controls the streets, while the disenfranchised and vulnerable are preyed upon by a powerful crime syndicate. The fate of London now lies with you and your ability to recruit and form a resistance to fight back. Watch Dogs Legion does what no other game ever has, by allowing you to recruit and take control of the people that you come across or interact with on the streets of the iconic, sprawling, urban, open-world City of London, you can play as anybody from an inconspicuous old woman, a burly bare-knuckle fighter or a skilled MI6 agent. Each character has their own unique set of skills, backstory, and personality that can be used at the appropriate moment to get you out of a bind. While it's a completely new melee system and a wide variety of destructive weapons and specialist skills make the way you engage in combat have real consequences.

Create the Spark of Revolution
After the demise of the hacktivist group from the original Watch Dog game, Dedsec, who was wrongly accused of a deadly terrorist attack has now been disbanded The State is now controlled by an Authoritarian government that uses the morally bankrupt forces of Albion, a mercenary military organization to stamp out any opposition and control the streets. The oppressed inhabitants of London are ready to create the spark of revolution, and it is now up to you to fan the flames into a roaring wildfire. Unlike any other game, you are not restricted to playing just one character, instead, you can assume the role of the thousands of hacked-off members of the public in the capital to give you a flexible, exciting experience. Can you reclaim the streets from the four major kingpins and crime syndicates by exploring and taking back the city's boroughs? Master a series of important, varying activities, such as gathering evidence sabotaging locations, or promoting your propaganda in a city where everyone is a potential hero.

What the Original Game was Intended to Feel Like
With every new mission that you accept there are so many options for you to contemplate, who has the necessary skills to pull it off and how you are going to tackle it, maybe blast your way through security that surrounds the Albion fortified headquarters with heavily armed drones or more discreetly disguise yourself as one of their employees and simply stroll straight past the oblivious guards. Plan out your operation and asses all the optional incredibly designed tools and come up with a plan using gadgets like drones, cameras, turrets and the brilliant spider bots that can secretly traverse even the most heavily guarded places, the game has special missions that are specially designed for them. Legion feels like the game that the original game was intended to feel like. Along with the enjoyable team building, great mission design, immersive storyline, and stunning environments, the game brings a dystopian London to life in this entertaining game.