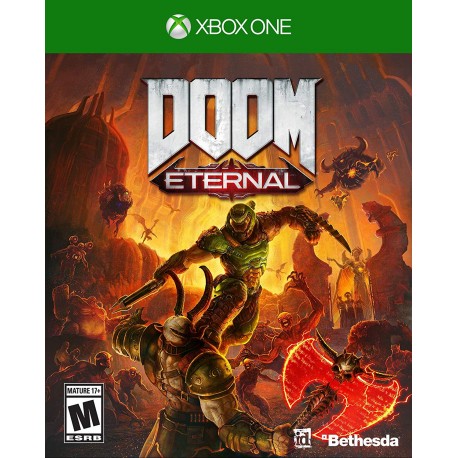 Doom Eternal is the latest first-person shooter video game entry in the iconic Doom franchise, a game from the developer id Software, the American studio responsible for great franchises like Wolfenstein, Quake or Rage, and publisher Bethesda Softworks. Released on 20 March 2020 for Windows PC, Xbox Series X|S & Xbox One One, PlayStation 4, and Google Stadia, Eternal is the 5th game of the Doom series and a sequel to the 2016’s highly acclaimed Doom. id Software has built on the previous success, with subtle changes and several improvements to an already great game, they kept everything that made Doom the best shooting game we have and adding to it to make it bigger and better.
Players assume the role of an ancient warrior who battles the demonic forces of Hell - the Doom Slayer - and pick up the story sometime after the events of the previous game of the series. The game was never about the story, but Eternal is a little more evolved on the narrative side than its predecessor. Developers create the game levels in a way that will almost always push the player further into the story. The more the player advance, the more difficult the game becomes, forcing players to leverage fight arenas and bonuses, and strategize the approach to combat by deciding how to move and in which order is better to kill the enemies.
What makes Doom the best shooting video game is fighting. The mindless mayhem was the primary attraction for most of the Doom lovers, and Eternal delivers more than ever hordes of demons in vivid ways that do not players to catch a breath. There are twice as many demons types in Eternal. We face again enemy types encountered in the other Doom games, like Arachnotron or Archvile, along with several newfangled kinds of enemies like Doom Hunter, Fireborne Barons, Tyrant, or Marauder. Doom expanded the arsenal of weapons, including Doomblade, Chainsaw, Combat and Super Shotgun, The Crucible, Unmaykr, BFG 9000, Plasma Rifle, Heavy Cannon, or Rocket Launcher, and the “Destructible Demons” system, responsible for the progressive destruction of enemies’ bodies in the fight, bring some novelty and improvement to combat.
Doom 2016 was all about brute-force. Eternal is complex and propose a new gameplay loop. Players have to balance their resources to be successful. The limited ammo, as well as the aggressivity and difficulty of the enemies, encountered, force players into the new gameplay loop-based essentially on resource management. The 2016 game was a solid base to build on, but it did not prepare players for Eternal. It may be alienating for the fans of the pure shooting, which may also complain about the expanded system and the increased focus on the story. However, if you want a demanding FPS, Doom Eternal is hard to beat and the general opinion is that id Software comes out with the best first-person shooter until now. It is impossible not to appreciate the huge bestiary, the amount and diversity of weapons, or the glory kill.
A last word about the multiplayer mode. Doom Eternal is essentially a single-player action first-person shooter, but Eternal presents players with two multiplayer modes: Battle and Invasion Mode. The Battle mode brings the option of 2v1 PvP (player versus player) multi-round death-matches, where two players take control of two demons, selecting from Archvile, Mancubus, Marauder, Pain Elemental or Revenant, and the third player pick out the role of the Slayer. The Invasion Mode, not yet available, is similar to the multiplayer mode of Dark Souls, basically allowing online players to jump into or “invade” the campaign of other players (it can be set off by those who want solo mode only) and fight them as demons alongside AI demons.