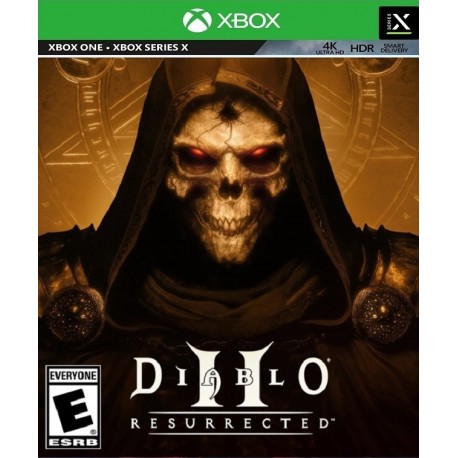 Diablo II: Resurrected is the definitive remastering of Diablo II and its Lord Of Destruction expansion, two of the hallmark entries in Blizzard Entertainment's Genre defining series of action role-playing games. Veteran players, as well as those who missed out when the original game was first released on PC over 20 years ago, can now experience Diablo II's timeless gameplay with updated modern visuals and audio that take full advantage of the Xbox One and Xbox Series X|S

Experience the Terror
Ascend the Forgotten Tower, blaze a trail through the Jungles of Kurast and storm the gates of hell to defeat Diablo himself. Then scale the peak of Mount Arreat to face Baal, the Lord of Destruction, in Worldstone Keep.

Choose Your Champion
Seven of Sanctuary's greatest champions await at the iconic campfire screen. The Amazon, Assassin, Barbarian, Druid, Necromancer, Paladin and Sorceress. Each is highly customizable with build and gear options for players to explore.

Battle Solo or Online
Diablo II: Resurrected can be `played as a solo experience or up to 8 player co-op. Blow off some steam and claim a few ears by engaging in thrilling PVP duels outside of town.

Having your favourite game updated and refreshed can be a daunting thing, will they retain the essential essence of the original and have improvements that take nothing away from the game that you loved to play. Well, fear not, Blizzard Entertainment have taken their genre defining game and polished it with love and care, leaving in place all those little quirks and foibles that made the game unique. The areas where they have improved Diablo II: Resurrected is in the graphics and animation departments, while faithfully recreating all the characters and environments then giving them the high resolution, high definition treatment that enhances but does not detract from the game that you remember. Not only that, but they have done exactly the same with the memorable background music and SFX, cleaning up the catchy soundtrack and making every familiar moan and groan audible.

The Perfect Combination of Champions
Although Diablo II: Resurrected is part of a series of PC games, but that does not mean that for a newcomer, you will be unable to follow the plot. Diablo II: Resurrected does start after the adventures told in the first game Diablo, those nice chaps at Blizzard Entertainment will kindly bring you right up to date quickly by retelling the story in the very first section by using cut scenes to illustrate all the information that you need. I have always found that the solo campaign is engrossing, my personal favourite is the multiplayer mode. By working together as your characters you can combine your long range, defensive and melee abilities to form the perfect combination of champions, as one blocks the incoming hordes, another champion picks them off at a distance while the latter cleans up any stragglers that get through. Using this tactic, you can achieve much more than when you are playing solo.

A Whole New Lease of Life
The Iconic, Diablo II: Resurrected was classed as the best of its genre when it was released on PC twenty years ago and after the new makeover by Vicarious Visions, Diablo will earn itself a whole new generation of fans and send the faithful running back to their consoles to relive the experience they so much enjoyed all over again. With a load of goodies and loot to collect, returning players will quickly remember how to change characters when one is not successful and the variable difficulty settings for those pesky chapters that you just can't get past. Use the skill tree to upgrade your character's specific skills, combine it with your captured loot and there is a never ending list of permutations that you can have. Then, when you take into account the high definition, high resolution tweaks and the superb sound design that has been added to bring the game into the present day. Blizzard Entertainment have given Diablo II: Resurrected a whole new lease of life.