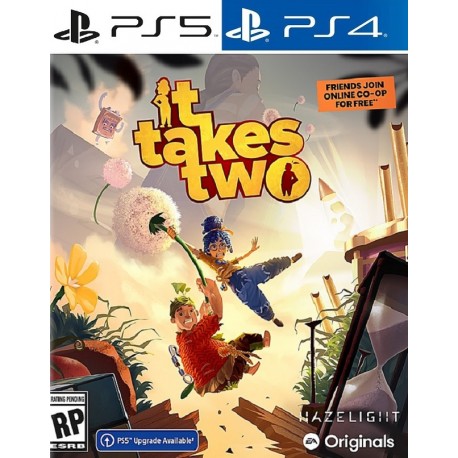 Embark on the craziest adventure of your life with Hazelight's newest game, It Takes Two, a mind-bending platform game that has been created solely for co-op, so invite your friend to join you and play for free with Friends Pass and then combine your talents to beat a huge amount of gleefully disruptive tasks and challenges. Play as the divorcing couple Cody and May, two people that have been changed by a magic spell and transformed into toy dolls stuck together in an amazing fantasy world that is unpredictable at every turn, the two are forced to finally confront their growing differences and save their broken relationship. You will have to learn to unite together to master unique and connected character abilities to overcome obstacles that you are confronted with on every level and assist each other past a variety of tasks and some hilariously funny moments, kick the little furry butts of vicious gangster squirrels, avoid rampaging vacuum cleaners, fly in a pair of extra-large underpants, you get to DJ at a buzzing nightclub or bobsleigh across an enchanted snow globe. Engross yourself in an emotional but laugh-out-loud storyline, where plot and gameplay interact to provide an individual imaginative experience.

Make Their Relationship Whole Once More
We join the story of a couple that is about to get divorced, Cody and May, and their daughter called Rose. When Rose discovers that her parents are about to permanently separate she is traumatized and retreats to her bedroom and cries, as her salty tears fall they land on a pair of toy dolls that look surprisingly like her parents, Cody and May are then magically transformed into the toy dolls and will now have to find a way to change themselves back into their human forms. They are led in their mission by a Book of love that goes under the name of Dr. Hakim, who tries to get them to find the missing pieces to make their relationship whole once more.

Pushes the Boundaries and the Possibilities
Hazelight the developers of It Takes Two are an award-winning independent game developer that is from Stockholm in Sweden, they were founded in 2014 and since their conception, Josef Fares their founder, who is a film director and game developer of such titles as Brothers: A Tale of Two Sons, they have always pushed the boundaries and the possibilities of what is possible in modern games like the 2018 BAFTA award-winning A Way Out which was their first-ever co-op only third-person action-adventure, which was part of the EA originals program.

It Takes Two is a Pure Delight
As a game It Takes Two is a pure delight, the gameplay is constantly creative and endlessly innovative and must be the best co-op game that has ever been available for the PlayStation. It has an unbelievable amount of variety which means that you will never get bored by repeating the same type of missions over and over, It Takes two constantly finds new ways to test you and your friend, (who can play online for free using Friends Pass), in their diverse activity-filled levels that will build collaboration and teamwork in real life, to overcome the tough but fair ingenious puzzles and masses of mini-games. Enjoyable, Funny, and damn good is the best description for this wonderful title.