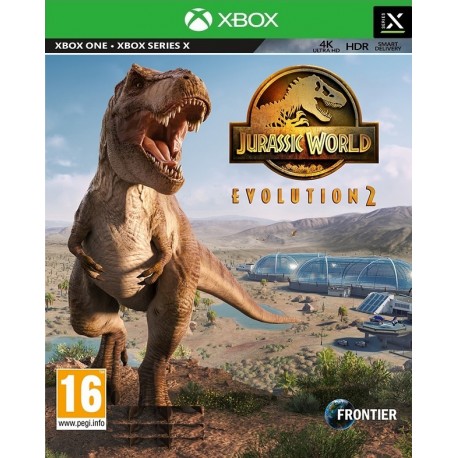 A Unique Jurassic World Story
Master this testing role as you take control of the management of this peculiar park in Campaign Mode.
You are placed in the middle of the action in this original story that follows from the devastating events from Jurassic World: Fallen Kingdom to Join some of the most recognizable from the movie series. Such as Dr. Ian Malcolm who is voiced by the enigmatic Jeff Goldblum and Claire Dearing with the incredible voice talent of the multi-talented Bryce Dallas Howard.
And lead these illustrious characters in your mission to control, conserve and contain the dinosaurs that are running amok across the United States

An Amazing Jurassic World for You to Create
Use the in-depth management tools and special creative options. Build and customize new individual structures and employ the new Scientists that you will require. It is up to you to design your park to fulfill the needs of both your guests and your prehistoric pets. Release your creative juices in Sandbox Mode or test those skills that you have acquired at assorted locations and deal with environmental calamities.

Play With The Chaos Theory
Step into the most iconic moments from the blockbuster movies in a series of what-if scenarios taken from the classic Jurassic World and Jurassic Park films, Where you will return to familiar times and memorable locations from all the five fabled movies. Immerse yourself once more in the influential Jurassic World franchise. Finally, you can find out what would have happened if you had been in charge.

Meet Some Amazing Species of Dinosaur
More than 75 prehistoric animals come alive and jump out from the screen in Jurassic World Evolution 2, especially the much asked for marine and aerial reptiles. Where Evolution only had the Pteranodon. Evolution 2 has a plethora of flying species like the Tapejaro, Geosternbergia, and Dimorphodon all new to Jurassic World and all need to be housed in aviaries and the same goes for the marine reptiles from the gigantic Plesiosaurus to the ancestor of the swordfish the Ichthyosaurus are all new to the collection and awe-inspiring visually and will need their special enclosures. Some of your all-time favorites are also returning, including the monstrous Indominus Rex and the clever and mischievous Velociraptors.

Relive Your Favourite Childhood Films
Frontier Developments have outdone themselves with this wonderful return to Jurassic World, with familiar gameplay that becomes intuitive, plan the layout of your park, research and unlock items to increase your popularity with the demanding park visitors. It is an addictive and stimulating. Once you have conquered the Campaign Mode, there are two other gripping modes other than the Sandbox. Chaos Theory is very entertaining, recap the dramatic scenes from the movies and find out if you could have done better. Build the original theme park where it all began. Challenge Mode is a beat-the-clock type Sandbox: set a time, and then see if you can better it.
Three testing Modes. Hours of fun and a chance to reminisce and relive your favorite childhood films. What more could you ask for?