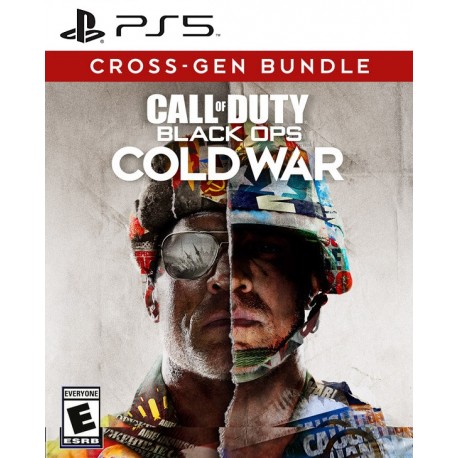 Irreversibly Change the Course of History
You are dropped into the hostile geopolitical early 1980`s world of Black Ops, for an enthralling solo campaign, that pits you against both historical characters and home truths. Authentic combat takes you across the world to distinguished locations such as Vietnam, Turkey, East Berlin even the Soviet KGB headquarters, and more, in this direct sequel to Call of Duty® Black Ops. You are a member of an elite group of special operatives, follow the movements of a shadowy figure called Perseus, and thwart his plot to destabilize the balance of power and irreversibly change the course of history. It is up to you to descend into the murky world of a global conspiracy as you unite with legendary characters like Woods, Hudson, and Mason and a new cast of operatives as you attempt to stop a plot that has been decades in the making. Welcome to the brink welcome to Call of Duty® Black Ops Cold War.

Hunt for a Formidable Soviet Agent Perseus
Developed by a combination of Treyarch and Raven Software along with prolific publisher Activision brings you Call of Duty® Black Ops Cold Wars campaign is set during the cold war of the 1980s Chronologically it takes place in between Call of Duty Black Ops and Black Ops II. The story focuses on the hunt for a formidable Soviet agent Perseus whose self-proclaimed goal is to subvert the United States and push the balance of power in the direction of the Soviet Union. You will get to play as Bell, a CIA agent recruited by Intelligence officer Russell Adler to a multinational task force that was specially formed to specifically take down Perseus. You will be pleased to welcome back such iconic characters as Frank Woods Jason Hudson and Alex Mason, the latter of which is a playable character on certain missions. As Bell you will get to decide the agency that they represent, your skin tone, nationality, and even gender, there are different personality traits that will give you advantages as you work your way through the campaign. The story has the added pleasure of various multiple finales that change depending on your choices throughout the campaign so think carefully before you act.

There is a Whopping 120 FPS
Call of Duty fans will enjoy this First Person Shooter, with its clever plotline, believable characters, and authentic locations the game is a true contender for the best outing in the Black Ops franchise. The number of extra modes makes it even more enjoyable with the likes of Zombies making a welcome return with one or two surprises to look forward to and the free-to-play Multiplayer Warzone that you can unlock. There is a whopping 120 FPS yes that is right 120 fps as this is the first game that is not limited to 60fps it is silky smooth to play. Overall another great addition to the series that is truly addictive.