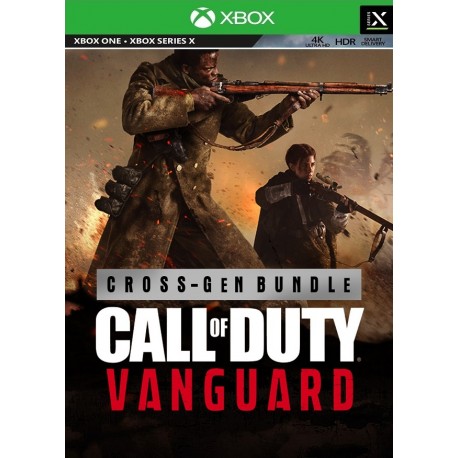 Fight on every front. Dogfight over the Pacific, airdrop over occupied France, defend Stalingrad with a snipers rifle or blast your way through the advancing enemy forces in North Africa. The Call of Duty® franchise returns with Call of Duty®: Vanguard, developed by Sledgehammer Games, where you will be plunged into realistic WWII combat on a never seen before scale. In a captivating single player campaign, an elite squad of soldiers from various countries unite to meet the world's gravest threat. Players can also make their with Call of Duty's signature Multiplayer experience, also a thrilling all new Zombies experience which has been developed by Treyarch. Call of Duty®: Vanguard will also bring in the unprecedented all new Call of Duty: Warzone integration post launch, and feature cross progression and cross generation play, Plus a massive calendar of free post launch content that adds in new multiplayer maps, modes, seasonal events, community celebrations and much more

Vanguard returns us to WWII once more, but on this occasion the campaign follows a party of individuals who are brought together to form an elite special unit tasked with flushing out a high ranking Nazi officer who is in charge of a secret mission called Project Phoenix. The game takes place at a curious time, as WWII is coming to an end after Adolf Hitler had killed himself and the German forces are in chaos. The team incorporates Lady Nightingale who was an actual Russian Sniper, a brash pilot from the United States, An explosives expert from Australia and the commander who is British. When they are captured by a Dominic Monaghan voiced Nazi, and we get to relive their experiences while we are guided through each of their individual backstories

Fascinating Adventures
As we are regaled with their fascinating adventures of our protagonists, we are transported from the Battle of Stalingrad to the war in the Pacific and thrown into the chaos of the D-Day landings. There are some twists that you would expect from a Call of Duty® game, like piloting your fighter through an immense dogfight or bomb Japanese ships in the Pacific, which is also the location where you get to use the more than satisfying Flame Thrower. In the Stalingrad section, Lady Nightingale can actually climb up walls, and it has vents for her to crawl through which have been cleverly designed throughout the bomb damaged buildings, so she can take her shot and escape without ever being seen.

An Instant Classic
The visuals are tremendous and with the cutscenes, they are some of the best I have witnessed on any Xbox. Almost realistic levels of detail are used on everything, from the grain on a wooden chair in a sitting room, to how the wispy clouds pass across the stunning sky, even the facial expressions of the characters are lifelike. A well produced soundtrack that was composed by Bear McCreary is combined with superb special effects and some really credible voice talent. The Campaign is innovative, Multiplayer is great and for those who love Zombies they are back just for you. Overall. Once again, the Call of Duty Franchise have given us an instant classic.