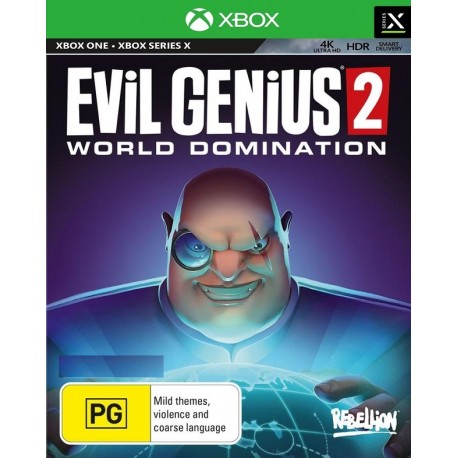 Evil Genius 2 is a satirical Spy-Fi lair builder, where players take control of an Evil Genius and set their plans for world domination in motion. When it feels this good to be bad, the Forces of Justice don't stand a chance!
Build your own unique Evil Lair and cover operation, train a force of criminal minions, defend your Lair from the Forces of Justice and dominate the world with a Doomsday Device in this direct sequel to the cult classic.

Cruel Constructions
Every villain needs an island lair, so pick your paradise and put your own sinister stamp on it! Shape the internal structure of your hazardous hideaway to fit your play-style, and construct wonderfully wicked devices for your minions to put to use.

Atrocious Anti-Heroes
competence isn't going to cut it when you're running an evil empire. As you expand and train your minion workforce, you can create new specialists to help further your evil plans! Needs something a little more.... Intimidating? Recruit powerful Henchmen that competence your play style, every mastermind requires a right hand......or several in fact.

Dastardly Devices
The Forces of Justice are annoyingly punctual, so supplement your brute force by researching and developing a series of trap networks! Send those do-gooders spinning with a while one, or put the chomp on them with the Venus Spy Trap. While one is good, more is ...evil-er. Combo your traps to banish intruders for good.

Nefarious Plots
Carry out evil schemes to further your plot to build a Doomsday Device and dominate the world! Sell the British Royal Family, Kidnap the Governor of Maine and literally Bake Alaska. With hundreds of potential objectives, variety is the spice of strife.

Gameplay is Silky Smooth
Yes, Rebellion have finally brought their hit RTS game to Xbox Series X|S, Xbox One. Firstly, using a controller instead of a mouse may seem a little strange at first, but quickly becomes as natural at controlling the HUD in Evil Genius 2 as when we played it on PC. There is no need for complicated, complex mechanics to navigate and access the different options. With the power that Xbox supplies the gameplay is incredibly smooth with no loading times and seamless movement between the objectives screen, world map or and your evil hideout avoiding those irritating loading screens. Even when you have crammed your multi level lair with heinous henchmen, meandering minions, and nefarious gadgets the gameplay is silky smooth and of course the melodramatic music superbly mimics the James Bond genre but with a comedic Evil Genius 2 twist.

A Perfect Crossover
I am happy to say that Rebellion has made a perfect crossover from PC to Console. Evil Genius 2 is great fun, with cartoon like graphics, easy to use controls and complex objectives that require a balance and strategic plan to succeed. Unleash your inner villain, capture and torture spies by giving them a wounding wet willy or by a severe tickling, control your minions without remorse or mercy and plot some of the most outrageous odious crimes the world has ever seen, yes it is good to be bad and so enjoyable to play!