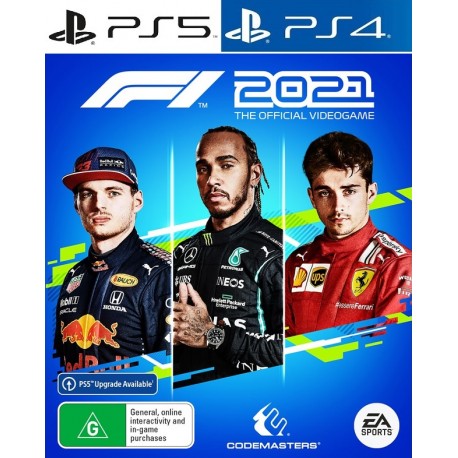 Formula 1® returns to PlayStation for the 2021 F1® season. There are some great new aspects to the game for you to enjoy, there is an exciting new storyline to follow in the Breaking Point experience, the new two player Career Mode, while the Real Season Start will put you on the front of the grid. Put yourself in the centre of the greatest racing game on earth, compete against all the 20 skilled and brave drivers in 10 world-famous teams that compete in the 2021 F1® season. Race online with interchangeable racing liveries in social competitions and races in ranked events, there is an all new Quick Join format, leagues and weekly events. You can join the unique F2 competition in a short, medium, or a full season options including 2020 and 2021 season content.

Especially for the PS5
Enhanced frame rate, Every second counts during breathtaking, dramatic race action, and with up to 120 FPS on the PS5. With the haptic trigger feedback, you can feel the car fighting you as you take a corner and gives you the sensation of acceleration and through breaking. Ray Traced Replays deliver Cinematic quality, broadcast camera shots and showrooms, and Ray Traced Lighting brings both the F1® and F2 competitions to life. The ultra-high speed SSD vastly reduces your loading times, while you can hear the difference with 3D Audio that when combined with compatible headphones produces realistic racing environments for all the 2021 tracks.

Both Teammates and Competitors
New to the F1® franchise comes Braking Point, a lifestyle scripted plot line that tells the story of two F1® drivers, rookie racer Aiden Jackson and his teammate veteran driver Casper Akkerman who are both teammates and competitors. Taking part over two seasons, the first from Aiden's perspective, the second follows on from Casper's point of view. It is a classic young newcomer and his aging veteran co-driver tale and the relationship that builds up between them as they face the rigors of a new season. You will play in selected races during the season, complete testing objectives, most of which involve you driving on the limit to achieve your target.

The Ultimate Race Simulation
Codemasters again have moved the game on from the 2020 version, with updated high resolution graphics that make the appearance of the game so realistic on both the PS4 and PS5 consoles, the introduction of the story based Breaking Point adds a whole new aspect to the package that includes a completely different insight into the F1® racing world. Career Mode will have you driving on the limit to get those all important front row grid starts that can mean the difference between success and failure. The Quick Join events will get you involved in leagues and weekly events without all the kerfuffle. With realistic and most importantly consistent handling. Racing is every bit as good as the real thing, without the controversy and corrupt championship outcome of the actual season. As their first outing for EA Sports, Codemasters have developed the ultimate race simulation and actually improved it.