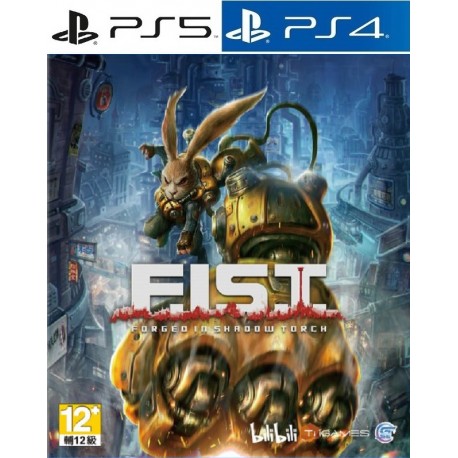 Forged In Shadow Torch. F.I.S.T. Is a side scrolling Metroidvania, with an arcade type combat. It takes place in the engrossing and well-designed Metropolis Torch City. There are loads of different categories of enemies for you to battle, they have their own distinct weapons and attack styles, and they are united in taking you out. Six years earlier, the animals were beaten in the Resistance Wars by the invading Legion. Since then, Rayton the rabbit, a former resistance member, has been keeping his head down and keeping out of sight. After his friend is arrested, he once again is drawn to don his huge metal fist and battle against the enemy that is subjugating Torch City and it's inhabitants. He will soon discover that there is a conspiracy that involves the Legion, the Resistance and the Rat Gang.

Different Challenges to Test You
As you traverse and explore Torch City, there are loads of different challenges to test you. With over 12 varied locations to discover that all have some great hidden rooms, secret passages and shortcuts for you to try and find. As you unlock new abilities, you can return to each section to examine further. You have three powerful weapons to master, each with its own fighting style, Fist, Drill and Whip are totally and quickly interchangeable between short and destructive attacks and long range offensive weapons.

Diesel Punk Environment
Our hero Rayton a rough, tough rabbit and one time rebel against the invading Machine Legion, the Furtizens of Torch City, who are a varied collection of animals with human characteristics that inhabit the Diesel Punk environment of the City, which seems to be directly lifted from early 20th Shanghai architecture. It has been beautifully and lovingly crafted By Ti Games in their very first outing into the gaming world. F.I.S.T.: Forged In Shadow Torch is a Metroidvania genre of 2D game which has all the elements that a platform game needs, combat, progression and discovery that combine to give you everything you want in a captivating game.

Unleashing Brutal Combo Attacks
The combat mechanics allow you to jump right in, when you start the game you will be quickly unleashing brutal combo attacks with any one of the three unique weapons at your disposal, although your opponents may have similar visual styles there is a vast array of melee and ranged attacks that they can perform, and defensively they have varied blocks and evasions to frustrate you, make sure you dodge their special attacks that can't be blocked. Overall, F.I.S.T.: Forged In Shadow Torch has fun combat that will have you going looking for a fight instead of avoiding one. Our hero has his own characteristics when it comes to his movement Double Jump, Wall Jump, Climbing Leap and Speed Dash for you to master. Once you have become an expert fighter and can traverse the City using your special abilities, you will be able to return to the sections that were inaccessible to you earlier to unlock new upgrades and skills, so exploration is always interesting. Returning to a section might seem a little frustrating at first, but the opportunity to discover a shortcut, secret passage or hidden room that you missed earlier is always enticing.

An Accomplished Debut Title
F.I.S.T.: Forged In Shadow Torch is an accomplished debut title for the Chinese developer is stylistic and well crafted, the environments are literally stunning, loads of fun characters and hordes of baddies to smash. It is true to the genre and with the added clear and tight graphics design combined with is engrossing gameplay make F.I.S.T.: Forged In Shadow Torch a testament to the novice studio and I have to praise their creativity and look forward to their next enthralling titles.