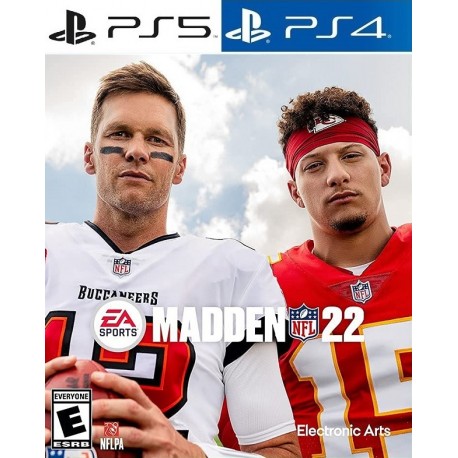 This is the PS4 version that will run on PS5 as well but with PS4 specs.

Madden NFL 22 is where the game day happens

The EA Sports classic Franchise is another of the death, taxes, and a new John Madden as the only certainties in life, So when Madden NFL 22 was released we were excited to see the latest game and see what updates and improvements have been made, this is the 40th edition of the game that has managed to hold its popularity and has been played by generations. Both father and son have enjoyed spending some time engrossed in the NFL action. It has come a very long way and even today is still making strides forward. With the ultimate version, there have been some innovative additions which are listed below.

Have Complete Control over Your Players
There has been a major overall of the Franchise mode that the public has been asking for, for quite a long time, so you have to give EA Sports some credit for listening and providing some wonderful new additions that the developers have focussed on. It has had a complete makeover, not just a touch-up, It now feels like you are playing an actual SIM. As the owner, you get to manage the day-to-day running of the entire organization, administer drafts, not only the training but also developing the support staff which you can level up. You will have a weekly strategy, controlling your budget for the season, supervise the promotion of your star players, and keeping your fan base content enough to invest in your merchandise. Having complete control over your players and staff, appoint your head, defensive and offensive coaches as you play games and complete coaching challenges to earn points to upgrade your coaching team.

Dynamic Game Day System
Other upgrades include the marvelous Dynamic Game Day System, which alters the gameplay and is influenced by the crowd and shifting momentum. Which is part of an update to the presentation of the game which includes the Next-Gen starts system, more detailed stadiums, and some great dynamic fan reactions. There is a newly introduced system that simulates the pros and cons of each different stadium, the reactions of the crowd, and how they can influence the game it effects when a play is called the fans might try and distract you, delay your audible calls, or by blocking the view of a player's number during a pass play.
Old favorites have been given a polish and return The Yard, Superstar X-Factor, Face of the Franchise and of course the ever-favorite Madden Ultimate Team. A brand new sound system, with some cracking hip hop and rock tracks, licensed songs the on-field audio is very realistic especially the roar of the crowd and that crunching sound when there is a brutal hit. Nice graphics that still look great even on a huge flat screen. So if you have been away from Madden NFL for a while, then now is the time to come back with this innovative new version. EA Sports are experts at reviving sporting franchises and they have had their usual success with Madden NFL 22.