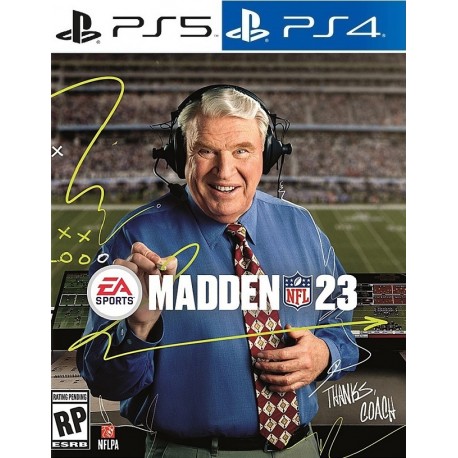 It's the PS4 Version but works on PS5 with PS4 Graphics!

Can you believe that Madden NFL 23 for both PS4 and PS5 is here already? EA Sports has a lot riding on this as the reception in recent years has been at best lukewarm and at worst downright disappointing, Well Grid Iron fans no need to worry as the latest iteration of the world's most popular sports game has left doubters silenced by taking a major leap forward. Because of the recent death of the NFL legend John Madden, it was clear that this would be a homage to the great man, Madden NFL 23 is the best version of the franchise that we have seen for quite some time. We will take a closer look at the improvements that have been introduced especially for this edition, from the graphics upgrades, gameplay engine, new additions, and changes to the most popular modes, we have covered.

A Rather Clever New Accuracy Meter
Let's start with the improvements made to Madden NFL 23, the Quarter Back passing mechanics, to which they have added a rather clever new accuracy meter that immediately lets you know if your timing is spot on or just off, not only does it help you to be more consistent in your passing abilities but also give the process precision and a more natural feel that seemed to be lacking before. The graphics are improved by enhancements to the colors that are brighter and crisper and makes great use of the incredible power of next-gen consoles, but still, stand out on the PS4. One of the most notable aspects for me was when it came down to the defense, the new FieldSENSE gameplay system not only makes playing the game more realistic, but it also uses the AI to make the defenders that little bit extra intuitive, giving you less time to play your perfect long pass as even the slightest hesitation is the best way that your Quarter Back will get sacked.

Employs Next-Gen Hit-Stick Physics
EA SPORTS have emphasized that running backs are now more fluid in their carrying and 360o cuts will enable you to hit the gaps as you run and change direction by having your Running Back step off from one foot to break a tackle and turn a short gain into a big play, The wonderful feature Hit Everything employs next-gen Hit-Stick Physics to make those bone-crunching mid-air knockouts or smash into the pile of bodies to make an assist on the tackle while standing up tackles which vastly increases the chance of turning over the ball. Enjoy some great one-on-one battles between your Wide Receiver and the opposition's Defensive Back, there are a host of release moves to break their hold and get yourself free for that crucial gain.