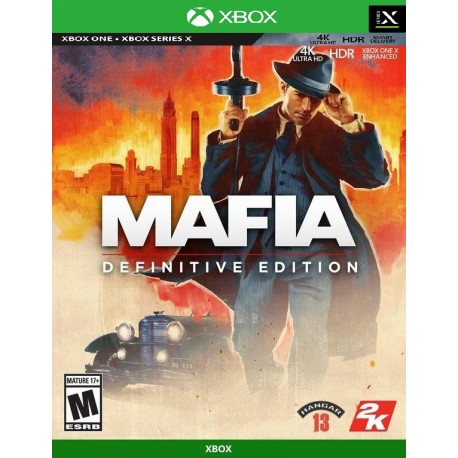 When Not Everything Is As It Seems
The great depression has taken its toll on the City of Lost Heaven, with the initiation of prohibition local gangsters have sensed a great opportunity to make a fortune, The Salieri and Morello families now fight over the control of the city, while a few honest cops struggle to keep order. Meet characters like Thomas Angelo, who had an unassuming life as a taxi driver rudely cut short after a crucial, life-changing run-in with the Italian Mafia. He now completes commissions for the infamous Don Salieri and is building quite a reputation for himself in the Lost Heaven underworld, but his conscience often gets in the way of his pride. This is your chance to become the main character in this cinematic story set in the world of gangsters and organized crime during prohibition. Mafia: Definitive Edition is a faithful remake of the classic game from 2002, but this time with an expanded story with incredible 4K resolution and vastly improved mechanics. Explore the vibrant and sprawling city of Lost Heaven that has been a realistic recreation of the 1930s American City

Totally Rebuilt it From the Ground Upwards
Firstly this is not just a revamp of the original game, instead, 2K has totally rebuilt it from the ground upward, especially the fantastic environments which were in the PS2 era lacked much detail in what was a City where every block looked just like the last with little to distinguish one from another. Well what a great surprise as the sprawling, highly detailed, and the vibrant city comes to life as you play, the design is iconic 1930s down to the street vendors, fire hydrants, and shopfronts making it one of the best looking games of the year and definitely the best in its genre, realistic and life-like it is a new city to explore and enjoy. It is not just the cityscape that has been vastly improved with some fantastic voice acting adding depth that just wasn't there before, plus the use of motion-capture shows off the character's natural mannerisms, you can visibly see your lover Sarah start to warm to you as you interact with her. Audio-wise, the sound mechanics are brilliant and the two radio stations that play on a constant loop have a collection of factual and fictional that broadcast alongside music from the period.

Launch Your Career in Organized Crime
Driving around the city becomes a pleasure as the vehicles are no longer a pig to drive, they are still quite heavy and slow in responding, but that is how the cars of that period were, a noticeable element of the game is the huge increase in traffic on the roads, in the original, there was only a small amount of other motors to contend with, be prepared for anything as your fellow drivers seem to have no respect for the highway code either. The gameplay consists mainly of driving, melee fighting, and shooting as you work your way up from recruit to wise guy. Mafia: Definitive Edition has improvements in every aspect, great graphics, fantastic sound, new and intriguing missions, and smooth gameplay, so it is everything that a budding gangster needs to launch his career in organized crime.