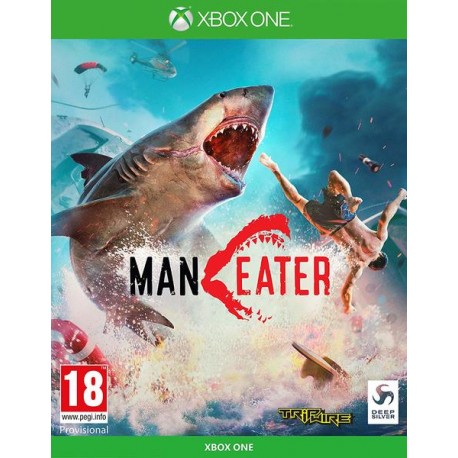 Maneater is a new action-RPG developed and published by Tripwire Interactive on 22 May 2020. The main character of this single-player video game is a shark. Players will assume control of a baby bull shark female and explore, evolve, and combat numerous enemies, both wildlife and humans. Maneater provides a unique atmosphere and gameplay. The ocean exploration, the evolving system, and the specific combat assure the success of this game title. Maneater is available for PlayStation 4, Xbox Series X|S & Xbox One One and Microsoft Windows. A Nintendo version is also in the works.
The narrative is simple and does not play a significant role, but it helps to create the B-movie atmosphere of this video game. In short, there is a famous shark hunter, Pierre “Scaly Pete” LeBlanc, the star of the in-game reality show “Shark Hunters vs Maneaters”. He killed a pregnant shark, which was in fact the mother of the main protagonist of the game and our playable character. He cut out from her dying body our pup bull shark, losing a hand in the process. It is a story reminiscent of Moby Dick, that players will further write it from the perspective of the shark.
Maneater is a role-playing game, and as in any RPG video games, players have the chance to improve their character. There are three different classes or Body Evolutions, as they are known in Maneater: Bio-Electric, Bone, and Shadow. Each one of the evolutions does something different. With Bio-Electric evolution come the shock attacks, and the power to stun the enemies. The Bone evolution is increasing the shark’s mass, which means the ability to support more damage and the power to use ramming attacks. The Shadow evolution brings more speed and poison attacks.
Players can upgrade the shark in five areas: head, body, tail, fins, and mouth. The evolution of the shark brings changes to the gameplay. The physics change with the shark’s growth. Players will hit five life stages with their shark: baby, teen, adult, elder, and mega. Everything you eat will make you grow. There is four kinds of nutrients: protein, minerals, fat, and something called “Mutagen-X”. The last one will provide unnatural powers and things containing them are rare. Growing to a certain point will make you reach a new stage of evolution, and this will open new evolution slots. Players may fill these slots with new abilities and customize them the way they want. Essentially, progressing through the story and completing some challenges is what unlocks new evolution slots.
The combat may be a little dull in the beginning when players control a pup shark. It will be a lot of the same, eating smaller prey. However, it is possible to engage in fights with stronger enemies, the main tactic being to hurt the bigger enemy and then fleeing, quickly eating smaller fishes to replenish your energy, then returning to attack the same target until it dies. Repeating this tactic will produce results, but players have to be careful as the enemies replenish their health as well. In time, your shark will grow, and once it enters adulthood will gain more battle moves. Players will now have access to more advanced tactics and may attack bigger and bigger enemies. Every life stage is challenging on its own and there are five, as mentioned.
Maneater follows the rules of role-playing games regarding progression, customization, and collectibles. This being said, there is no other game like it. It is shark-PG. The shark physics and combat are very specific. Playing the game from the perspective of a shark is unique and exploring the underwater open-world is rewarding.