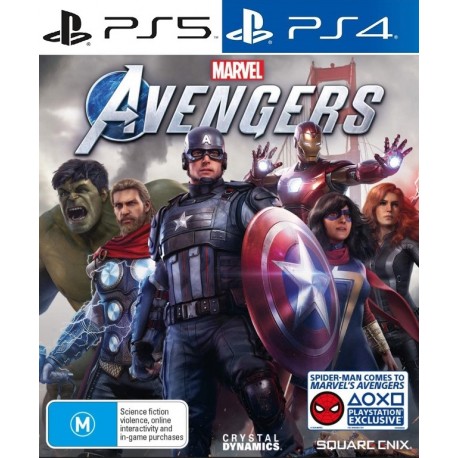 Live Out Your Super Hero Dreams In This Epic Action-Adventure
Welcome to the most epic, action-adventure game, third-person experience that is the brilliant Marvel's Avengers. Follow the unique cinematic story by playing either single-player or cooperative gameplay. It is up to you to assemble a team of up to four players online, learn to control your incredible abilities, and customize the increasing number of Super Heroes on your roster. Only you can defend the planet from the ever-increasing threats that the world is facing. In a universe where Super Heroes have been outlawed, it is down to youngster Kamala Khan to bring the Avengers back together again in order to prevent AIM from causing devastation. The journey continues for Marvel's Avengers as they recommence their quest with brand-new Heroes and a completely new narrative, giving you the most action-defining Avengers game experience.

Marvel's Avengers is a totally new and original story, The plot commences with the five main Avengers, Iron Man, Hulk, Black Widow, Thor, and Captain America celebrating the opening of the new hi-tech San Francisco Avengers Headquarters and their very own Helicarrier which gets its power from an experimental source of energy after things go array the blame falls on the Avengers, and they are forced to disband the team. Move on five years and with all Super Heroes now being outlawed and the world in danger it is the New Jersey teenager Kamala Khan that discovers the source of a dramatic conspiracy and soon realizes that she needs to reunite the avengers if they are going to have any chance of Stopping Advanced Idea Mechanics and their deadly plot that threatens the whole planet.

Save the World From the Bad Guys
If you are one of those people that have been sitting on the fence deciding if you should wait for all the initial bugs and extra content to arrive, then I can tell you now that wait no longer, with the improved gameplay, stunning graphics, and brand-new content that has arrived then it is time to jump feet first into this wonderful Super Hero gaming experience, become your favorite Hero master their incredible powers and as all Super Heroes do and save the world from the bad guys.