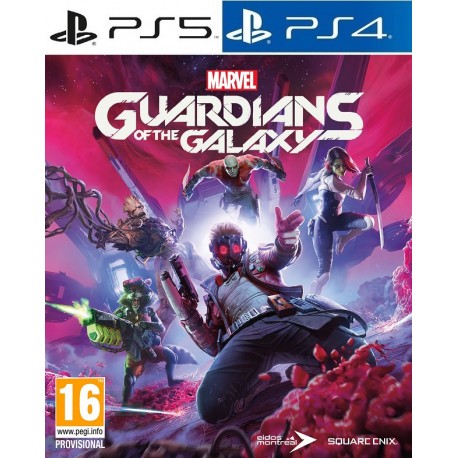 Buy account license for Marvel's Guardians of the Galaxy for PS4 and PS5. Best price on the internet.

You become Star-Lord in an out-of-this-world adventure. Fire up your jet boots for a wild ride across the cosmos in a third-person action-adventure, a fresh take on Marvel's Guardians of the Galaxy. With the unpredictable Guardians at your side, blast your way from one explosive situation to another, with original and iconic Marvel characters caught in a struggle for the fate of the universe. In this single-player adventure, you will experience an electrifying and original plotline inspired by more than 50 years of Guardians of the Galaxy lore. Selectable dialogue options between Quill and the other Guardians help you to strengthen the bonds between this unique, dysfunctional family.

A Wild Variety of Cosmic Enemies
Obliterate your foes with Star-Lord's Element Blasters, and call on the unique abilities of each Guardian to defeat a wild variety of cosmic enemies. Mix and match your daring skills and your crew's distinct strengths to fight with skill and style. Of course, it wouldn't be the Guardians of the Galaxy without a killer soundtrack to rock out to while soaring through space in the Milano. The game is jam-packed with classic 1980s hits and kicking original tracks.

Click Play on Your Walkman
Well, holster your blasters, warm up your jet boots and click play on your Walkman because it is time to go and save the universe. Marvel's Guardians of the Galaxy developed by Eidos-Montrèal is a role- playing, third-person shooter with puzzle-solving and so much more. We join our intrepid heroes Peter Quill (Star-Lord), Gamora, Rocket, Drax, and Groot onboard the Milano where they are bounty hunters that travel the cosmos and cause mischief wherever they go.

From One Disaster to Another
We join the gang as the universe is slowly recovering from a destructive 12-year war against the Chitauri, Quill has left the ravagers and is attempting to lead his motley crew of murderers and assassins from one disaster to another this is where we enter just as they are exploring a part of deep space that has become of interest to the Nova Corps. The Guardians along with their intriguing backstories. The plot is delivered in chapters that will have you interacting with some of Marvel's most popular characters.

There Begins Your Journey
Your team's various misadventures have finally caught up with them, and you will be sent to a Nova Corps ship to pay your restitution, and there begins your journey. Along the way, you will meet some incredibly weird and wild characters such as Cosmo the Russian telepathic space dog, a wire chewing purple llama, Lady Hellbender who collects rare creatures and is one tough cookie and Mantis a capricious, unstable superbeing who has knowledge of all the different threads of space and time.

The Locations Look Amazing
The game looks and plays fantastic, nothing looks as good as when you are traversing the neon-lighted streets of Knowhere are a pleasure to behold, especially on the smooth and solid 4K 60fps. The various locations look amazing as you pass between your ship the Milano, Nova Corps vessels, and stunning familiar worlds with their own distinct designs.

Hours of Fun with Earth's Mightiest Heroes
With the many new open-world games that have recently hit the market, it is a relief to finally have a game that has a linear storyline and solid gameplay instead of a map with hundreds of different places of interest and extra missions to distract you. Marvel's Guardians of the Galaxy is not only for the fans of the film, anyone unfamiliar with our irrepressible heroes will still have loads of fun in this wonderful game that requires you to listen and not only blast whatever is in sight, decisions made earlier in the game can come back to reward you much later. Square Enix has designed a game that you will need to use your brain just as much as you do your muscle memory to complete. With enjoyable gameplay, great action and fantastic graphics, Marvel's Guardians of the Galaxy has everything that you need for hours of fun with Earth's Mightiest Heroes.