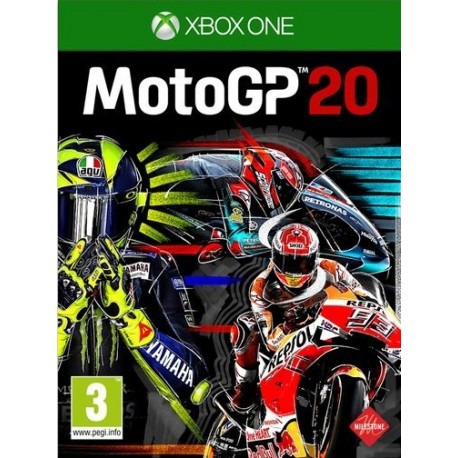 MotoGP 20 is a motorbike racing simulation video game developed and published by Milestone S.R.L. (acquired by Koch Media) on 23 April 2020 for PlayStation 4, Xbox Series X|S & Xbox One One, Microsoft Windows, Nintendo Switch, and Google Stadia. It is the official game of the MotoGP competition, with content from the first major motorbike racing competitions: MotoGP, Moto 2, and Moto 3. As every year, we found the updated teams, circuits, racers, everything that 2020 Season has to offer, including a brand new track – the Finish “Kymiring”.
This year's release improved on an already good racing game. As the MotoGP 19, it uses the Unreal Engine 4, and the A.N.N.A. – an Artificial Intelligence based on Neural Networks (Artificial Neural Network Agent). This approach is different from the standard one. Instead of a predefined set of behaviors, the developers set a goal and teach the A.I. to achieve it, training it by providing examples of behavior. The A.I. will learn how drivers behave in certain situations and will try to reproduce and optimize that behavior. The manoeuvers and techniques learned to provide a more natural driving behavior, in the footsteps of professional drivers. This year A.N.N.A. is even better because new additions to the gameplay determined a deeper A.I. to keep peace with the improvements. The Neural A.I. now has to manage fuel consumption and manage tire wear, both present and improved on MotoGP 20.
MotoGP 20 has several game modes, the most important being the main career campaign or the Career Mode. In Career Mode, players decide in which class they want to start their driving career: Moto 2, Moto 3, or MotoGP. They may customize the driver and bike. One of the important choices is the style of riding, but players will have the best fun with the Editor. The other game modes are Grand Prix, Time Trial, Championship modes, Historic, and Multiplayer modes. In the Historic mode, players will be able to drive and race with famous riders and bikes. Besides the 20 official tracks of 2020, there are 2 additional historic tracks. The Grand Prix is a single race. Time Trials are focus on obtaining a good time. And the Championship is a season of racing, without the many managerial additions found in the Career mode.
The Multiplayer has several game modes: Private Match, Public Match, and Race Director Mode. Players may play online with friends, match up with random racers, or direct and supervise races (Director), doing things like setting the race sessions, weather conditions, issue race penalties, and more. An eSports section completes this incredible array of game modes and options.
MotoGP 20 entered in the managerial gameplay with a new Managerial Career. In Career Mode, for the first time, players may experience the world of motorbike racing on and off the track. In short, players chose their key members of the team, like the personal manager and technical staff. It contains everything you may expect from a management video game: the budget determines the hires, the person has different skills, the results of the bike depends on the work of the technical team, and so on.
MotoGP 20 is probably the best motorbike racing video game, now more realistic, more challenging, and more fun.