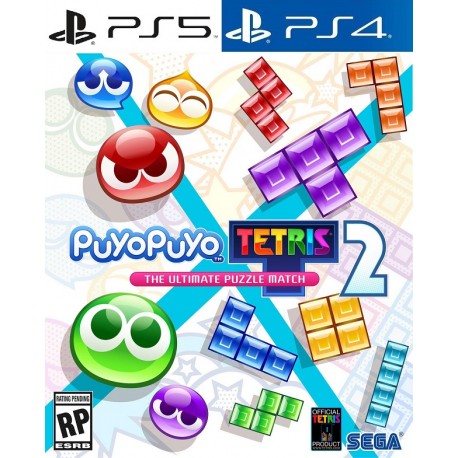 Japan's favorite puzzle game series Puyo Puyo and the world-famous Tetris® game franchise have once again teamed up to bring you even more Puyo-popping and Tetrimino-clearing enjoyment in Puyo Puyo Tetris 2. Learning to play is easy, just match four or more Puyos of the same color or complete a line of blocks to clear them off the board and dump garbage into your opponent's game. But make sure you keep an eye on what is about to come your way also. Play traditional Puyo Puyo or Tetris® you can even mix them up together to level up your game, whether you play online or offline you can play your way with loads of fascinating modes, either single-player adventure to couch competition, versus to ranked online matches and much more.

Save Both Worlds From Destruction
You would be forgiven for thinking that there was no need for Tetris® to have a story mode. Well this Tetris®, Puyo Puyo combination has proved us all wrong. Match game addicts like me are provided with enjoyable single-player gaming and intense multiplayer battles. The storyline of Puyo Puyo Tetris 2 is a credible way to introduce yourself to the masses of amazing characters the game has to offer and also some of the unique game mechanics. The story starts with the SS Tetra being pulled into our world as the barrier between the two dimensions is in danger, Ringo (Puyo Puyo) and Tee (Tetris) must round up their friends to work out how they can save both worlds from destruction. The story uses a map with increasing levels that have new destinations and brutal opponents to compete against. It is so easy to pick up as a newcomer to the series, win your matches collect your credits, and buy new items from the shop. Using the skills and item cards does get a little more complicated as each character has its skill that you can use during the testing boss battles. As the game progresses the challenges do get harder to win.

Addictively Enjoyable with Bizarre Characters
One thing that Puyo Puyo Tetris 2 does not lack is different modes to compete against, Versus mode, is your common or garden head to head, Swap Mode features two boards with one Puyo Puyo and the other that swap randomly throughout the game, Party Mode where special blocks drop when you clear a line or match Poyos which then activates a special move trigger that then increases drop speed or an option called searchlight to name but two. Big Bang mode and Fusion mode are two other great experiences. Whether you play online, in local multiplayer, or compete against the AI, Puyo Puyo Tetris 2. is a game that you will find so difficult to put down, addictively enjoyable with bizarre characters and unique abilities for the team battles Puyo Puyo Tetris 2 is a wonderful combination of two games that are iconic in their own right and even better mixed together.