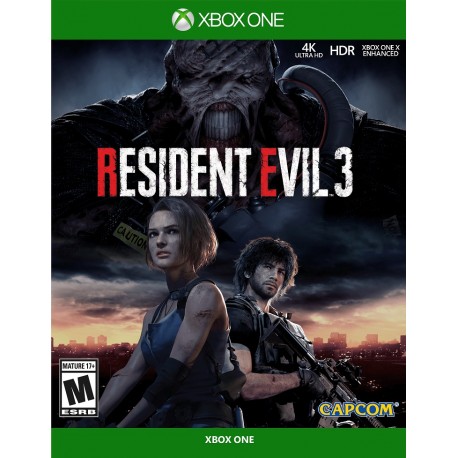 Resident Evil 3 is a remake of the survival-horror video game Resident Evil 3: Nemesis that went out twenty years ago in 1999. The Remake was developed and published by Capcom, known for games like Devil May Cry, Street Fighter, Resident Evil, Monster Hunter, and more. Resident Evil 3 was released on 3 April 2020 for PlayStation 4, Xbox Series X|S & Xbox One One, and Microsoft Windows. There is also an online multiplayer mode called Resident Evil: Resistance. Resident Evil 3 is am homage to a classic, true to original in a high degree, attractive to nostalgic folks that played the game on their youth, as well as to the players that discover for the first time a game that at its time invented a genre.
Players are taken to Raccoon City, the place where an evil pharmaceutical company created a bioweapon known as Nemesis and released a virus known as T-virus. Resident Evil is a series of games, and the events in Resident Evil 3 take place before and after the events of Resident Evil 2. The playable characters are Jill and Carlos, and they have to survive this zombie apocalypse and escape from Raccoon City. During the game, players will assume control of both characters, some sections being played as Jill, and others as Carlos. This is a change because in the previous game we’ve seen the story played out either as one character, or the other. It is a well-known zombie apocalypse story, full of clichés, but the characters are likable and the atmosphere created is truly amazing.
Capcom was praised for its fidelity to the original game. They maintained the known mechanics and most of everything. But there are some important changes that created some heated debates. The goal seems to be to offer players a fluent experience, the feeling they are characters in a horror movie. With these goals in mind, Capcom operated some significant changes. The most debated one relates to the role of the puzzles. In the original game, they were real brain problems and in high numbers; now we have very few, and not that difficult. The experience is more fluent, as it is not halted by puzzles, but is it a good thing or not? Players have to decide.
Capcom also favors the action on this game title. Players may feel the Nemesis’ pressure, but this is because the map changed. Before we had some interconnected areas that were harder to reach and explore, where now this approach was replaced with a linear experience that provides more action, but it is less mysterious and less difficult. The single-player story campaign is taking less time to finish, and it is less intellectually challenging and more action-oriented. Capcom’s decisions influenced the game design, and it must be said they managed to reach their goals and provide a very good game. The question resides with the fans of the franchise that know the original game and how it compares with it.
Overall, Resident Evil 3 is one of the best remakes, an impeccable work worthy of its predecessor. At its time, Resident Evil defined a genre of games. It is an action-horror video game that offers a memorable experience, even to those that played the original game.