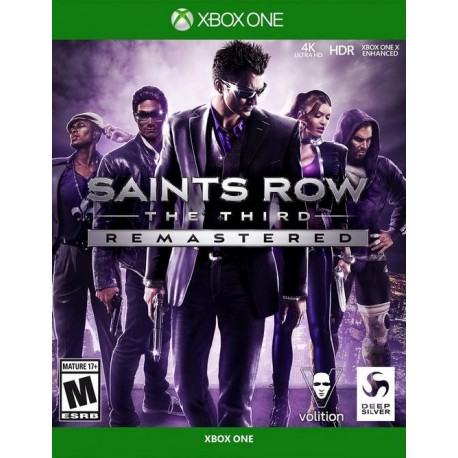 Saints Row: The Third Remastered is an open world action-adventure video game developed by Volition and published by Deep Silver on 22 May 2020 for PlayStation 4, Microsoft Windows, and Xbox Series X|S & Xbox One One. This is the remastered version of the game originally released by THQ in 2011 for PS3, Xbox Series X|S & Xbox One 360, and PC. Deep Silver later acquired THQ in 2013. A version of Saints Row: The Third was released for Linux in 2016, and for Switch in 2019. The remastered version is taking advantage of the latest hardware available and improved the game in multiple ways, including higher resolution graphics, new textures, animations, particle, and lightning effects. The result is the best game of the franchise yet.
The action is taking place in the virtual city of Steelport, where the Third Street Saints gang is in a turf war with the Syndicate – a union of the other rival gangs: Morningstars, Deckers, and Luchadores. Saints have to keep an eye on the Special Anti-Gang unit (STAG) – the government forces tasked to destroy organized crime in the city. The players assume control of the Third Street Saints with the goal to overtake the Syndicate. They are able to customize their playable characters as they wish, including how they look, how they dress, what cars they drive, and what properties they own.
The Remake maintained the gameplay of the previous versions, and players who enjoyed the original will find that the same tricks and cheats work here as well. The developers worked hard to create the nostalgia effect, taking care that the new images and textures will trigger the player’s memory and the pleasure of that precious time spent playing this video game title. Everything was reworked, some things even from scratch. It is visible on vehicles, weapons, pretty much everywhere. Because of the lighting and particle rays, everything looks a lot better, more realistic lit at any time of the day. There are more characters and cars than in previous games and some new weapons.
The game contains the main story campaign that may be played solo or cooperatively online or offline via System Link. Players may navigate the city using vehicles; some of them should be unlocked, including a hover jet and a tank. Players may use various weapons in combat, from regular gang arms, like pistols, shotguns, or semi-automated machineguns, to some less seen in these circumstances, like rocket launchers or drones. Some weapons are ridiculous, like the purple dildo bat or the fart-in-a-jar grenade.
Saints Row began as a clone of GTA, then the developers decided to take the series into a new direction that will differentiate them on the market. Therefore, they made a satire of how the media and the society, in general, reflects the gang culture. They dial up on humor (before Borderlands) and crudity. They tried to find a balance between silliness and seriousness, trying to be funny, but also sincere and critical, hence the blunt dialogues and some bad taste jokes. Overall, they succeeded and gathered many praises for their work. The original game was a nominee for Best Narrative video game in 2012, and this speaks volumes about the accomplishments of Saints Row: The Third.
Saints Row: The Third is a relevant and compelling game and an appealing proposition for newcomers and fans of the franchise. The best way to experience this iconic video game is the remastered version.