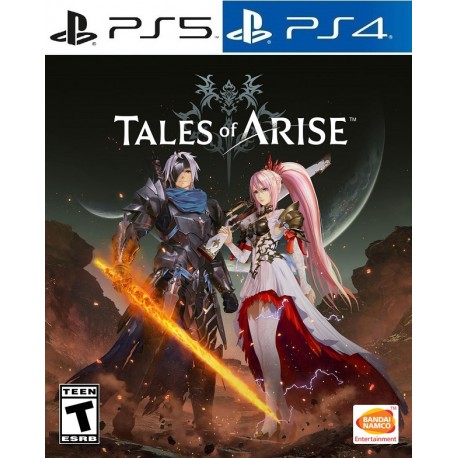 A Captivating Story
For 300 years, Rena has ruled over Dahna, pillaging the planet of its resources and stripping people of their dignity and freedom. Our tale begins with two people, born on different worlds, each looking to change their fate and create a new future. Featuring a diverse cast of characters, an intuitive and rewarding combat system, and a captivating story set in a lush world worth fighting for, Tales of Arise delivers a first-class JRPG experience.

17th Main Title in the Tales Franchise
Since its first appearance way back in 1995, The Tales JRPG has been going from strength to strength, and I am pleased to say that Tales of Arise is thankfully no exception. The game is an excellent addition to the franchise that will win over both old and new players alike. Incredibly, Tales of Arise is the 17th main title in the Tales franchise, and it is just as bold as all of its predecessors, reworked visuals and a well-developed plotline is packed full of the twists and turns that the Tales series has become famous for and with extra additions that guarantee the most incredible experience.

The Story Commences
The story commences at a labor camp and a slave miner who is being brutalized by one of the sadistic guards, this is where we are first introduced to our protagonist, Iron Mask, (voiced by the talented voice actor Sean Edward Chiplock who is well known for his English version work on Japanese anime and games). After saving the Dahnan slave from certain death in the Calaglia Mines, we quickly learn that the people of Dahna have been subjugated by the cruel and technologically advanced Renans and used as slave labor to extract valuable resources by their overlords.

Your Epic Journey Begins
This is where your epic journey begins, you must use your determination and skill to finally bring an end to the corrupt regime and free the land of the Renan abusers. Iron Mask's name is actually Alphen, a man with no memory of his past, who can not feel any physical pain. Soon into the story, he comes across a woman in distress called Shionne Imeris who is escaping from a group of brutal Renans after he aids her the two join forces and the quest advances in earnest. The couple traverse the various regions of Dahnan, which are each controlled by different lords, that have their own individual methods of oppressing the locals.

Tales of Arise is Set in a Stunning World
Bandai Namco have gained a reputation for its beautiful anime aesthetics and their wonderful storytelling with the Tale's series of games, which are visually elegant, and as always so much fun to play. A new progressive difficulty game mechanic means that you can just jump in unleashing devastating combos straight off the bat, but as you advance the need for timing, both your attacking and defensive moves increase radically and knowing how to tactically use your companion's special skills at just the right moment becomes vital. As with its predecessors, Tales of Arise is set in a stunning world, divided up into different unique realms, each has its own individual design from snowy mountains, to lush green pasture’s to a volcanic wasteland, each one is visually alluring and has its own problems for you to surmount.

An Instant Success with the Newcomers
A great storyline that is engaging, thought-provoking, and amazingly emotional, will draw you into the dystopian world of Dahnan. Impressive graphics, charming animation, and absorbing gameplay that will keep you engaged throughout. Tales of Arise is surely the best outing that the franchise has ever produced and takes a huge leap forward with the introduction of the powerful next-gen consoles that vastly reduced loading times and clearer, sharper graphics but even on older machines it does not disappoint the gamers that are familiar with the Tales series and will be an instant success with the newcomers who are new to the franchise.