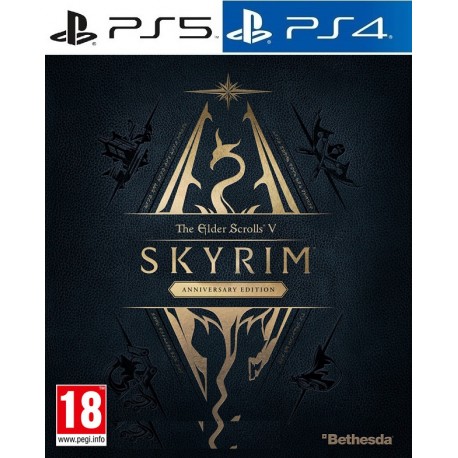 Winner of over 200 Game of the Year awards, The Elder Scrolls V: Skyrim Anniversary Edition includes an entire decade of content, the main game, all the add-ons from the highly acclaimed Special Edition, and new Creation Club content including quests, dungeons, spells and much more.
Skyrim reimagines and revolutionizes the epic open-world fantasy, bringing to life the entire virtual world ready to be explored at will.

Live Life in Another World
Play as any kind of character you can imagine and do exactly whatever you want, the legendary free will, narrative and adventures of The Elder Scrolls have been brought to life like never before. Choose from hundreds of weapons, spells, and abilities. The character system will allow you to play the way you want and define yourself through your actions. Fight against dragons like you could never imagine. As a Dragonborn, learn their secrets and harness their powers to use them.

Included Content
The Anniversary Edition includes the original game, new and existing Creation Club content, and all three earlier add-ons. Dawnguard, Heathfire, and Dragonborn
If you already own the PS4 version of the game, you can get the digital version of the game for PS5 at no additional cost and without the need to purchase this product. When you purchase The Elder Scrolls V: Skyrim Anniversary Edition, the games are automatically updated, and you will receive four free pieces of Bethesda Creation Club content, Saints and Sinners, Strange Curiosities, Survival Mode, and of course Fishing.

Saints and Seducers
A new dungeon is added likewise new quests are introduced, plus two new artifacts, various weapons and armor sets, ingredients for alchemy, summoning spells, pet taming and so much more.

Strange Curiosities
Here you will find new powerful potions, arrows, and deadly poisons for you to concoct, plus new items that are for sale at the Khajiit Caravans

Survival Mode
It adds all new aspects to Skyrim by making you take into account such things as cold, rest, and hunger into the equation, which adds a whole new dynamic to the gameplay.

Fishing
Yes, that is right, there actually is a completely new mechanic that will allow you to pick up carbon fiber fishing rods and try to catch various types of fish in the crystal waters of the rivers and lakes that criss-cross the province. Also, there are specific objectives for you to complete, or you can just put your catch as a trophy on the walls of your home.

Remastering of its Graphics and Performance
For those of you lucky enough to own a PS5, The Elder Scrolls V: Skyrim Anniversary Edition has been given a huge remastering of its graphics and performance. The latest generation consoles have had their resolution upgraded to a frame rate of 60fps. But the most impressive thing is the loading times, which have been reduced dramatically to just a second or two, so entering and leaving a location almost instantly with no lag at all.

Over 500 Additions
For those who already own The Elder Scrolls V, there is a reduced cost for all of this extra content, the new game and all three expansions, the game-changing graphical and performance updates, the Creation Club new content, there are over 500 additions for you to discover including weapons, armor, spells, exciting new missions and changes to the gameplay.

For those of you that are new to Skyrim and do not have any of the previous versions which have been introduced over the last 10 years then this massive package is a great, money-saving way to have the most accomplished version of the game and literally 100's and 100's of hours worth of fascinating and intriguing gameplay in a skilfully created fantasy world, complete your missions to proceed, or maybe you can just go fishing and relax.