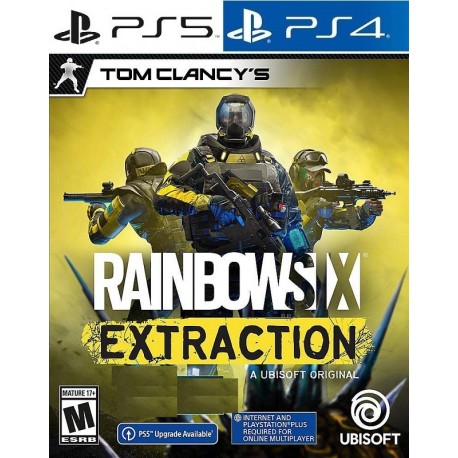 Your team is your best weapon! Join millions of players in the Rainbow Six, Extraction is a 1-3 player cooperative PvE FPS. Where you unite elite Rainbow Six Siege Operators against a deadly alien threat known as the Archaeans. Assemble your team, coordinate your assault, and risk it all to make sure no one is left behind. Join forces online with a squad of up to three players, with full platform and save compatibility. With unlimited ways to customize your line-up, you will need a well-rounded team, knowledge of your enemy, and unwavering cooperation to come out on top.

Powerful Combat Perks
Learn and master the unique gameplay, weaponry, and skills of 18 specialized operators in a deep progression system. For the first time, you can upgrade their gear, improve their stats, and access unique load-out options and powerful combat perks. Unlocking new adventures along the way. All 12 containment zones that are spread across the United States are controlled by the Alien parasite, creating an unstable ecosystem within its walls. With each game, enemy locations, objective details, and map features change, forcing your team to adapt.

Caution Against Boldness
Airdropped into the middle of an alien war zone, you and your associates will pick your favorite operators and will land in one of four different zones, which are each split into 3 primary levels making a total of 12. Your task is to complete three of the distinctive main objectives and once they are completed you will pass through a familiar airlock only to be left with the conundrum of whether to extract back to base and bank all of your hard-earned experience points or attempt another mission. Caution against boldness will lead to some very interesting conversations with your team of players.

Vital to Locating Enemies
You will get to choose from some of Tom Clancy’s Rainbow six's most specialized elite military characters such as IQ, she was one of the first to volunteer when the Archaean emergency was first declared, her tenacious, no-fail attitude was welcomed immediately and her expertise with the R.E.D SPECTRE electronics detector makes her vital to locating enemies and communicating their location to the rest of the team. VIGIL which specializes in electronic and electrical engineering, has stealth technology, the ERC(Electronic rendering cloak), which gives Vigil a distinct tactical advantage when engaging the Archaeans and PULSE, with a history of working for the FBI collecting and analyzing biometrics. His recalibrated HB-7 cardiac sensor has been tweaked and especially retuned to detect Archaean physiology, which makes him indispensable for search and eliminate missions.

Something Very Bad is About to Happen
There are an amazing array of special gadgets for you to take full advantage of, there are over 20 to be more exact as well as the 19 special operators who each have trained and now specialize in a certain piece of equipment that will be vital for you to complete your task. UBISOFT has once again raised the bar for FPS games with clear and tight graphics, a storyline that has that ominous sensation that you could turn the next corner and something very bad is about to happen. The audio sets the scene and helps the gameplay flow without being overbearing or intrusive. Imagine the feeling when you return to a failed mission scene to pry the battered body of one of your friends from the grasp of an alien horde will always be one of the most exhilarating, thought-provoking, emotional missions you will have ever faced in Tom Clancy’s excellent Rainbow six series of FPS games.