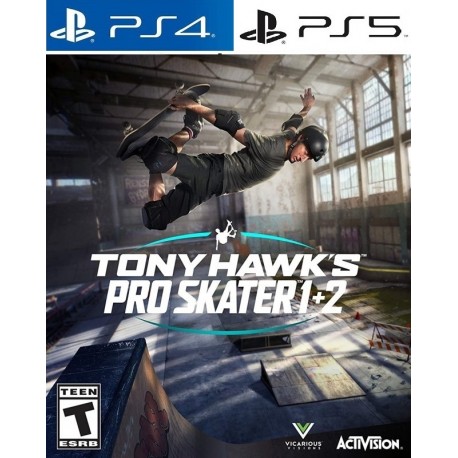 This is the PS4 version. Will run on PS5 with PS4 graphics.

Stepped up to a Totally New Level
Going back to my youth, there were only a few games that were really iconic and played by almost everyone around, one of those classics was Tony Hawk’s™ Pro Skater™. Few games could ever compete with the slammin' tricks, grinds, grabs, and flips that made it such a realistic and enjoyable experience, then when Tony Hawk’s™ Pro Skater™ 2 arrived the whole experience was stepped up to a totally new level, well that was way back in time and video games have changed dramatically since those halcyon days, but imagine if you could play them both again, but this time they have been completely rebuilt from the ground up, new graphics, new gravity-defying game mechanics and some of the most stunning graphics for both the characters and the interactive environments. Well put on your best kryptonic wheels, and pads, and prepare yourself for a nostalgic journey back in time to an era when it was not just about doing it well, but doing it with style while looking great. Now imagine that you could get both games for the price of one, well imagine no more than Tony Hawk's Pro Skater 1 + 2 Standard Edition is out now for the PS4 and PS5.

Without Doubt, a Definite Compulsory Buy
For those of us that are older in body, young in mind, having the likes of Eric Koston, Kareem Campbell and the wonderful Bob Burnquist making a timely return in what must be their 40s and still pulling off a selection of grabs, flicks, tricks, and some ridiculous big air moves is quite inspiring and without doubt a definite compulsory buy. Add to that the introduction of some of the latest future stars of skateboarding, with an 18-year-old Aori Nishimura and a veteran at 28 Leo Baker, which is sure to strike a chord with younger newcomers to the game that has not had the pleasure of experiencing a classic Tony Hawk's game or how good it actually was. The difficulty of redesigning a winning formula is just how much do you change? Although you will all have your favorite locations from the first two games in the series the thought of not being able to throw your board around such iconic environments as the warehouse of the anger would leave you highly disappointed we want them in there, but we want them to look and play notably better than before and that is exactly what Tony Hawk’s™ Pro Skater™ and Tony Hawk’s™ Pro Skater™ 2 deliver in spades, even the gameplay mechanics that have taken a leaf out of Hawk’s™ Pro Skater™ 3's book, by using its gameplay to give you the opportunity to make massive combos by pulling off reverts and manuals, this has only stood to improve the game while taking nothing away from the original.